In August 2015, Dzongsar Khyentse Rinpoche returned for a visit to the birthplace of his lineage, Dzongsar Monastery, in Sichuan Province, China. This first-person account of Rinpoche’s visit gives a taste of the fervor with which he was welcomed. For more about the history of the Dzongsar Institutes, read our in-depth Focus Where It All Began.

Like children who have been too long away from home, we sped toward Dzongsar Monastery. More intense than the hot August sun was our keen longing for the return of our teacher, Dzongsar Khyentse Rinpoche. The road was lined on both sides with monks and villagers holding khatas in their outstretched hands, their eyes shining with devotion and hope. Applause and the music of long horns and cymbals signaled that Rinpoche had finally arrived at Dzongsar Monastery. 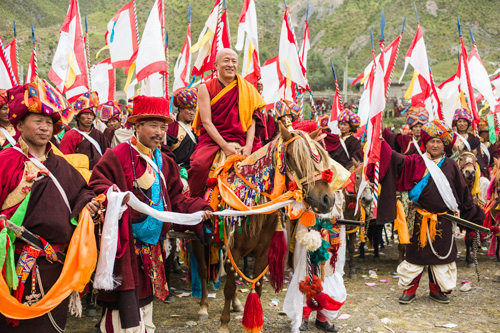 Rinpoche arriving in Dzongsar. Photo by Winnie Alamsjah. Click the image to see Winnie’s photo essay of the return to Dzongsar.

Dzongsar Monastery overlooks the Khamje Valley in Derge near the Yangtze River (known in the Derge region as Golden Sands River), which divides Kham from the Tibetan Autonomous Region. Throughout its 1,300-year history, the monastery was supported by the villagers of the surrounding areas. These devoted practitioners were the earliest patrons of the monastery, and through Khyentse Foundation, Rinpoche has been able to greatly enhance this support.

During his stay in Dzongsar, Rinpoche sometimes took time from his busy schedule to tell us stories about the fascinating history of the monastery and how it developed into a full-fledged shedra, or teaching college. “Actually, the first khenpo of Dzongsar was Mipham Rinpoche,” Rinpoche told us. “He gave teachings here because there was no other place for him to do so.” Rinpoche explained that Jamyang Khyentse Wangpo and Jamgön Kongtrül Lodrö Thaye built the shedra at the place where two rivers merged. They saw the shape of a bow and arrow, which was pointing at a pig-shaped mountain. The pig is the symbol of ignorance. “Jamyang Khyentse Wangpo said that if a shedra was built at the place of the arrowhead, many scholars would be trained there.”

During the late 18th and early 19th centuries, many Nyingmapa, Sakyapa, and Kagyupa teachings and traditions were in decline. To preserve and revive those traditions, Dzongsar Monastery, with its rimé (nonsectarian) approach, trained a large number of scholars and siddhis for the different schools. And that training continues today.

“It’s amazing that Dzongsar Monastery has students from Sakyapa, Kagyupa, and Nyingmapa. In fact, currently most of the Sakyapa and Kagyupa khenpos come from Dzongsar Monasteries in Tibet and India.”

The Tale of the Dzis
Rinpoche told a touching story about three sisters in Dzongsar during the Cultural Revolution. “In fact,” he said, “there would be no Dzongsar Monastery today if not for them.” Before leaving Dzongsar, Jamyang Khyentse Chökyi Lodrö gave the three young sisters 50 rare and precious dzi beads. He asked the sisters to take care of the dzis and give them back to him when he was reborn. During the Cultural Revolution, the three sisters endured inexpressible torture and pain, but they guarded the secret, vowing to stay at home and remain unmarried. Even though they had an opportunity to go abroad for a better life after the Cultural Revolution, they chose to stay at Dzongsar, waiting for Rinpoche’s return. In 1992, Rinpoche returned to Dzongsar and assumed the responsibility of reconstructing the monastery. That reconstruction was covered by funds raised through the sale some of the dzis.

The two surviving sisters of the dzhi. Photo by Winnie Alamsjah. Click the image to see Winnie’s photo essay of the return to Dzongsar.

This year, Rinpoche visited the sisters again. The eldest one has passed away, and the younger two are in their 90s. They told Rinpoche that they may not be there when he returns next time. Immediately, Rinpoche did prayers for them. The sounds of prayers, mantras, and sobs blended together as we witnessed the disciples’ devotion to their teacher.

Dzongsar Monastery Today
Rinpoche continued with his discussion of Dzongsar Monastery. “It was Dr. Lodrö Phuntsok who rebuilt the monastery. Now he’s engaged in another huge undertaking—the Tibetan Medical Institute. However, due to the lack of manpower and resources, we neglect the science of fine arts and crafts, which I think is the best in the whole Tibetan area. But we have so many things to do, so we neglect it.”

Rinpoche visiting with Khenpo Phuntsho Namgyal. Rinpoche has said that that Khenpo is probably one of the most knowledgeable Tibetan scholars existing in the world today. Photo by Pawo Choyning Dorji.

Rinpoche pointed out that since it was founded in 2001, Khyentse Foundation has contributed to the support of Dzongsar Monastery. At present, the monastery provides support for more than 2,000 monks, nuns, and the lay people, many of whom are in lifelong retreat. Rinpoche said, “Khyentse Foundation should be proud of Dzongsar Monastery. More than 200 khenpos have been trained at the shedra over the last 27 years and these khenpos can now teach throughout Asia and the West.” Rinpoche went on to explain that Dzongsar Monastery provides a rich environment for a high-quality education.

Many khenpos have also expanded their studies to explore other philosophical traditions, reading texts by Karl Marx and Immanuel Kant. They are eager for opportunities to learn and put their knowledge into practice. Rinpoche wants to provide khenpos with much more diverse courses, including economics, finance, and social studies. He added, “I have noticed that many Tibetan lamas may need some leadership training.” Khyentse Foundation is now developing plans for leadership and educational programs at Dzongsar.

Rinpoche gave teachings and transmissions not only in Dzongsar, but also at monasteries and villages along the way as he traveled. And he spoke about the preservation of local culture and environmental protection. He is such a great master who works tirelessly for the benefits of Buddha activities and all sentient beings.

The sound of the horse hoofs receded into the distance, but we know that deep in our heart our guru never leaves.
—Helena Wang