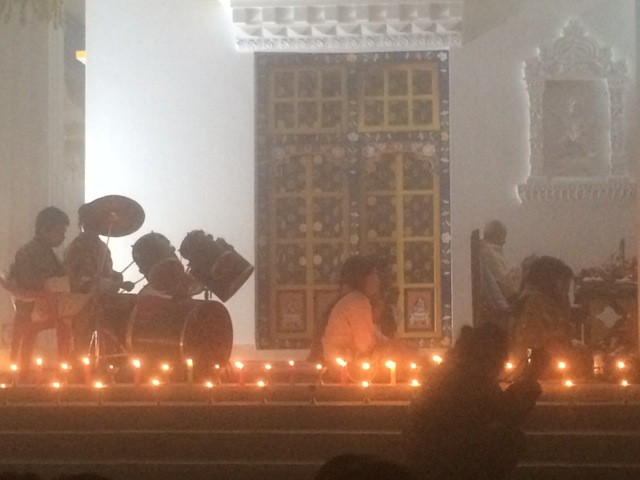 Bringing a monastery into the modern world with groundbreaking initiatives in Eastern Bhutan.

Chökyi Gyatso Institute (CGI) in Dewathang, Bhutan, is a unique Buddhist institution that is introducing a number of groundbreaking programs initiated by Dzongsar Khyentse Rinpoche. CGI started as a small temple built by Rinpoche’s maternal grandfather, the late Lama Sonam Zangpo. It is now headed by his reincarnation, Drubgyud Tenzin Rinpoche, who is Rinpoche’s official representative there. While adhering to a traditional curriculum, the monastery is a testing ground for some of Rinpoche’s most forward-thinking innovations in monastic education. CGI is a shedra (monastic college), offering a thorough education in Buddhist philosophy to more than 140 monks. It is also an active monastery with a busy schedule upholding the practice lineage of Jamyang Khyentse Wangpo. The monastery has a very close relationship with the local community.

The shedra is outstanding in its commitment to the environment and the community through its collaboration with Lhomon Education (LME) and the Samdrup Jongkhar Initiative (SJI). The monastery is one of the first to declare a Zero Waste policy, encouraging the community to reconsider the habit of offering packaged biscuits and snacks, instead putting great value on traditional weavings, home-churned butter, locally grown organic vegetables. The monks have learned and instituted a number of sustainable practices since the launch of SJI in 2012.

Rinpoche’s vision is to have a body of socially engaged, educated monks who are informed about and involved in the world around them. Young monks at the shedra are participating in a pilot project to develop alternative, holistic curricula, integrating art and the environment into the classroom. Drubgyud Tenzin Rinpoche has developed a holistic curriculum for novitiate monks, introducing them to the core concepts of the Dharma through interactive play, music, and arts. For two hours each day, Lhomon Education also offers a secular education, with classes in math, science, English, and social studies. KF funds classroom materials and supports other LME programs.

The monks at CGI enjoy a much healthier and more nutritious diet than monks at many other Bhutanese monasteries. KF continued its support for food costs with a US$33,800 grant for enhanced nutrition in February 2016. Several independent donors have also generously offered contributions to enhance nutrition at the monastery with money for local milk instead of powdered, eggs, and fresh fruit. “I am moved by the enthusiasm and good intention of donors and rejoice at their generosity to support CGI’s diet requirements,” said Amelia Chow, KF monastic education coordinator. “The primary focus of KF funding is to feed the monks adequately, in addition to programs that bring them into the modern era.”  KF will continue to promote healthy diets at the shedra and welcomes interested donors to make designated contributions to KF instead of direct contributions to the shedra. This approach simplifies the shedra’s accounting processes.

Rinpoche supports the monastery from his personal accounts, and there is also quite a lot of support from the local community. In addition to its financial support of CGI, KF has invested some of its most expert human resources to ensure that the monks are trained in the most up-to-date accounting systems. Amelia Chow, Toni Whittaker, and Pema Biddha stayed at the shedra for two weeks in December 2015. “It was our first trip to CGI as an accounting team, and there were many accounts to sort out,” said Amelia, “not just for the KF food account, but for the entire monastery. With four years of fast-paced expansion, many construction bills had accumulated.”

Tshewang Rinzin is the monk who acts as liaison with KF. “He is diligent and a fast learner,” said Amelia, “and the accounts are super transparent. But the system is complicated with many accounts managed by different people. We felt like detectives on a discovery tour! Or playing a jigsaw puzzle. But at the end we got the picture. With continued support from KF, we are sure that an effective system will be put in place to help with the overall management.”

This kind of attention is a hallmark of KF contributions — not just providing funds but making sure that there are systems in place and accountability. Amelia’s team all work as volunteers, which is an invaluable part of the way KF functions.