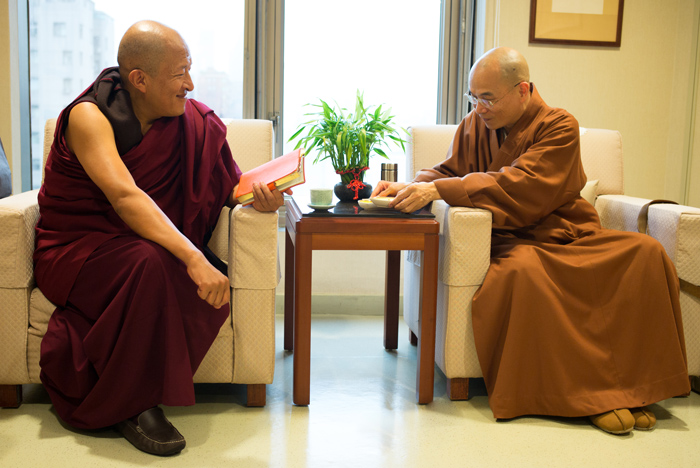 On March 6, 2014, KF and DDBC, Taiwan, held an official signing ceremony to mark the commencement of their partnership to fund the translation of Tibetan texts into Chinese and to train translators at the Dharma Drum Taipei center. This ambitious collaboration may be the first of its kind, with the potential for historically significant impact in the field of translation of Buddhist texts. More than 200 people participated in the ceremony, which was led by Dzongsar Khyentse Rinpoche and Venerable Hui Min, president of DDBC.

Once they are translated, the Tibetan and Sanskrit Buddhist texts will complete the missing sections of the Chinese canon, a welcome addition to the Chinese cultural heritage. In line with its mission of supporting the study and practice of Buddhism, KF agreed to fund a one-year pilot project to explore a sustainable direction for this project and also to gather input from other experts. KF’s experience in this field includes having established 84000: Translating the Words of the Buddha, a massive project that aims to translate from Tibetan into English the Kangyur and Tengyur, and to make the translations widely accessible.

Chinese and Tibetan Buddhist texts have primarily been translated from Sanskrit and Pali. However, because of many historical, geographic, political, and cultural factors, some Buddhist texts are available only in Tibetan or only in Chinese. More than a thousand Buddhist sutras and commentaries are not available in the Chinese Buddhist canon, not counting the tantric texts.

Many Buddhists have long wished for the translation of Tibetan texts into Chinese. However, to carry out this project, the translation team must have expertise in classical Chinese, Tibetan, and Sanskrit, and also a deep understanding of Buddhist philosophy. Very few academic institutes in the world are equipped to carry out such an ambitious project.

Professor Sonam Wangyal, a Tibetan scholar and the director of the project, explained that the complete Tibetan Buddhist canon has been translated into Mongolian and Manchurian four separate times in the past. To set up a Chinese translation project of Tibetan Buddhist texts in a modern academic institute will be a milestone in Buddhist history, he said.

DDBC will also set up programs to train more translators and to welcome scholars who share the same aspirations as the great Chinese translators like Master Xuan Zang and Kumārajīva. DDBC also plans to conduct comparative studies of Sanskrit, Chinese, and Tibetan texts.

After the completion of the signing ceremony, Rinpoche gave a talk titled “Translating the Words of the Buddha.”