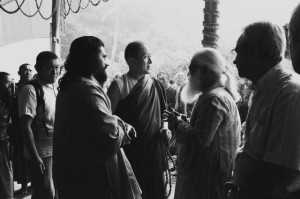 I went to Bodhgaya to attend the Khyentse Foundation board meeting and to sit with my teacher under the bodhi tree in 2013. There I could sense a thread of continuity from the Buddha himself all the way to Khyentse Rinpoche. Emaho!

Even though the core message of the Buddhadharma is timeless, I realized that in his wisdom Rinpoche has foreseen the importance of rebuilding and strengthening the pillars that have supported Buddhism throughout history. This is an endeavor to which Rinpoche applies himself whole-heartedly and to which he devotes as much effort as to the guidance of his students.

One method to cultivate devotion to Rinpoche is to walk alongside him in the mission of preserving Buddhism as a live, authentic, and relevant tradition in the 21st century. Since Rinpoche has to a large extent entrusted this task to the Khyentse Foundation, by supporting it we can broaden our relationship with the teacher.

However, I believe that the emphasis should not be on the size of one’s contribution. Undoubtedly, on an outer level one can do far more things with a large sum of money than with a small one. But there is an inner level at play as well. And the person making the smaller contribution could be taking a far bigger leap toward enlightenment. So it is best to have equanimity and cherish all contributions as equally precious.