Tsering and Jigme at Naropa

Starting in January 2020, Khenpo Phurbu Tsering and Khenpo Jigme Lodoe studied at Naropa University in Boulder, Colorado, USA. The two monks attended classes in English language and Buddhist Studies under Khyentse Foundation’s English for Buddhist Scholars (EBS) program. In July 2021 they returned to India, looking forward to implementing the new teaching methods they learned at Naropa University. Tsering is at the shedra at Dzongsar Khyentse Chökyi Lodrö Institute (DKCLI) in Chauntra and Jigme is at nearby Tashi Jong Monastery, as instructors to the younger monks studying there. 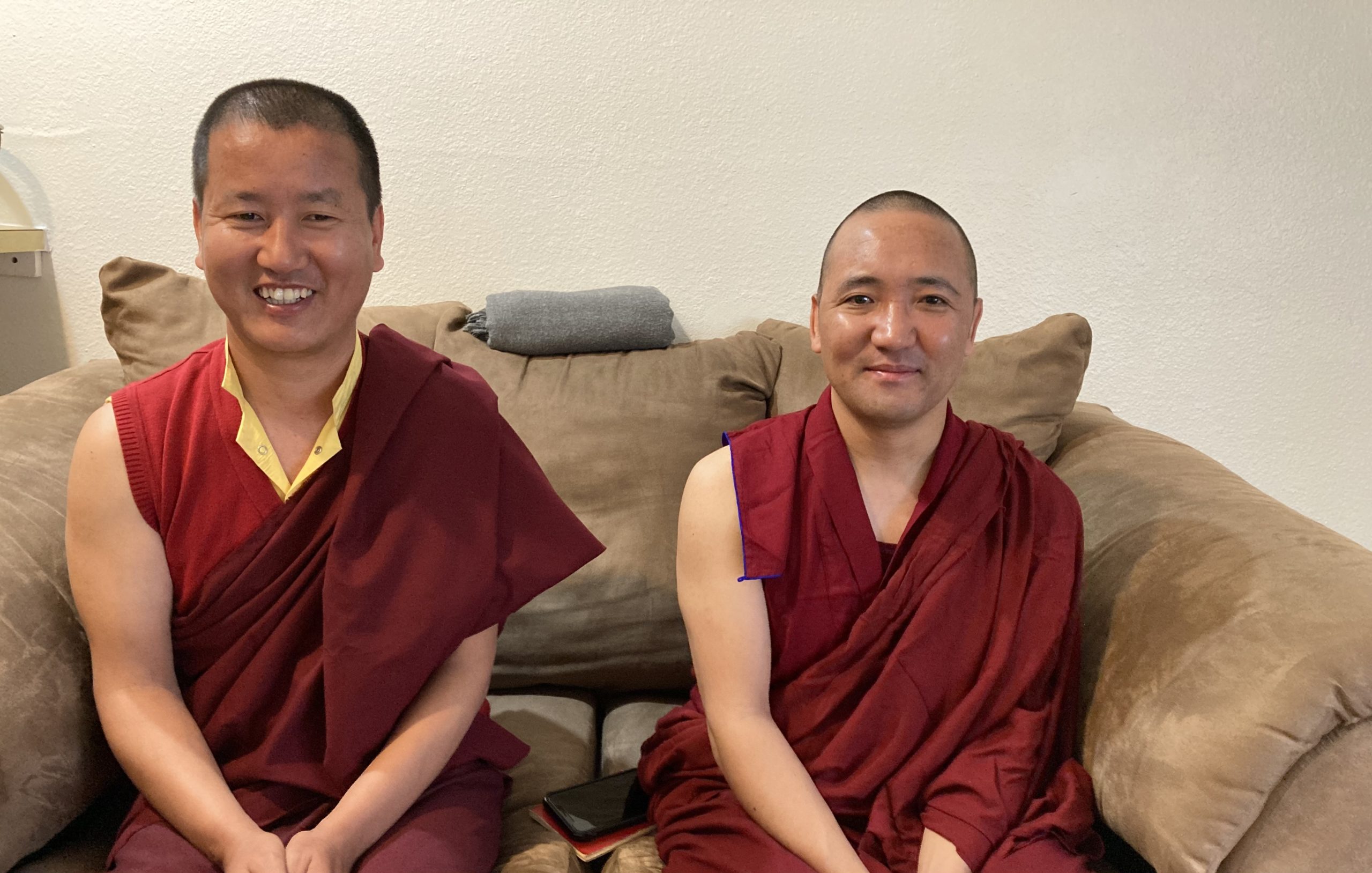 The EBS program was launched in 2016 with the aim of equipping khenpos and lopons with the language skills they would eventually need to translate and to teach the dharma in the West. (Khenpo and lopon are titles that reflect advanced degrees in Tibetan Buddhism.) Candidates for the program were selected on their merits as teachers and scholars in their home monasteries as well as for some proficiency in basic English. Before they were offered an immersion scholarship at an American university, the monks were exposed to an intensive course of language training in India designed to give them the minimum level of fluency and comprehension to cope with the rigors of academia. So far, four scholars have received the immersion scholarships.

In addition to his studies at Naropa, Tsering enjoyed hiking, biking, and cooking curries for his new friends. The informal interaction with his classmates helped him to appreciate the personal and social challenges that people in the West face today.

“My experiences abroad expanded my understanding of real human suffering, including modern mental health issues such as the turmoil of emotional unbalance, sorrow, loneliness, and depression, and how a presentation of dharma could be based on these,” Tsering said. He discovered how Buddhist teachings can be approached and delivered in various ways, gaining insight into how the dharma can be integrated with social engagement. And he learned the importance of matching his approach to people’s experience, worldview, needs, and capacities.

Since returning to Chauntra, Tsering has based his teaching on personal experience rather than theory, and he relates the material to contemporary issues. He engages the students in dialogue, incorporates short meditations, and avoids using technical terms. Although he has many other ideas about additional teaching styles and methods that could be implemented in the curriculum, in fact he sees no need for major changes in the monastery’s basic educational structure.

Jigme feels that his time at Naropa allowed him to assimilate Western culture both in and outside the classroom. “My time in the West affected my teaching style by exposing me to methods that were lively and profound—they engaged the students in a personal way that included tackling day-to-day living as part of the pursuit of enlightenment. Since being back in Tashi Jong, I have slowly been trying to introduce some modern experiential styles of learning and to encourage teachers to prepare lesson plans with handouts and visual aids rather than relying solely on memorization.” 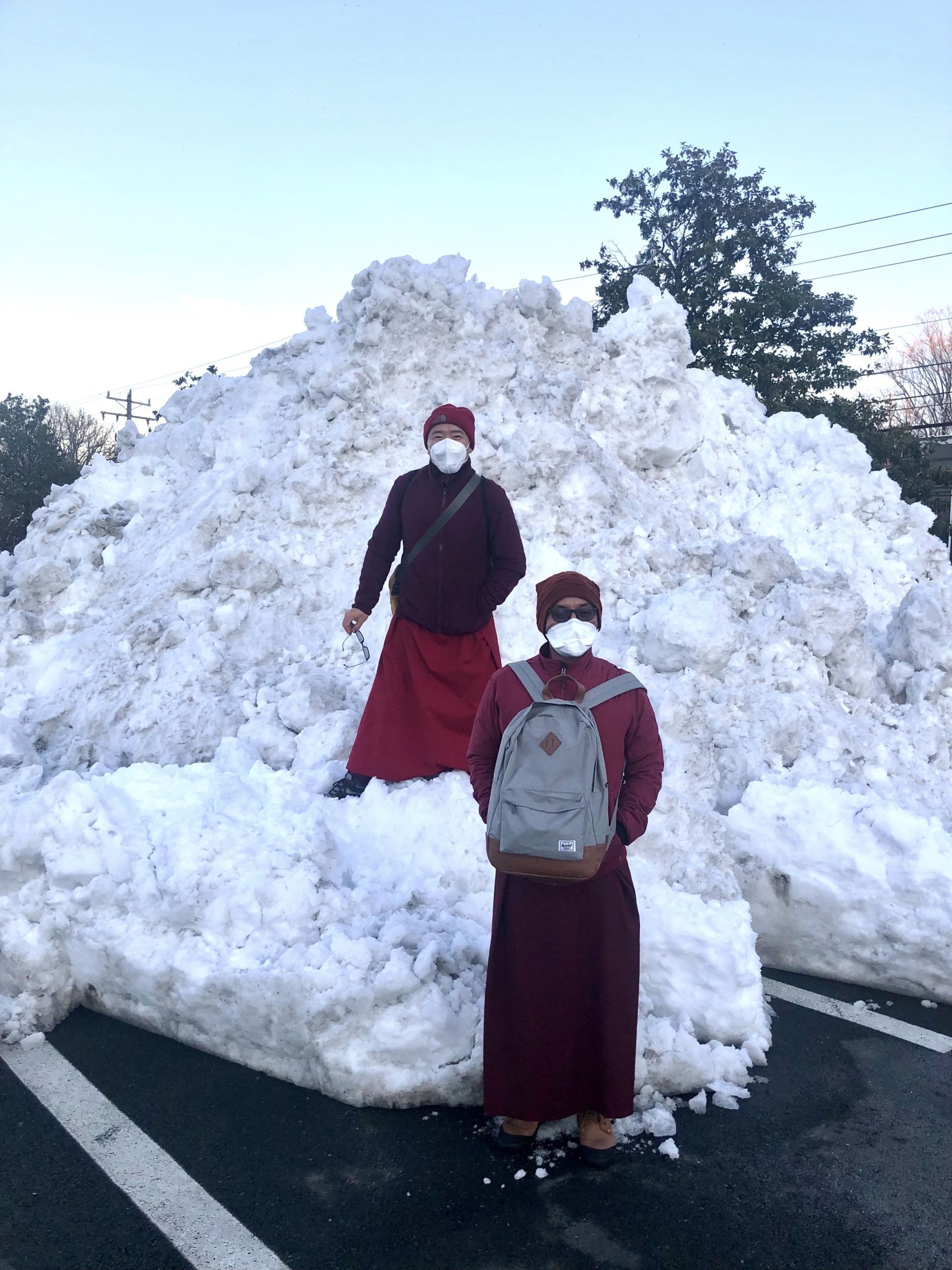 Lodoe and Palden at the University of Virginia

In early 2022, Lopon Lodoe Rabsang from Diru Sakya Monastery in Bir, India and Lopon Dhondup Palden from Sakya College in Dehradun received scholarships to study at the University of Virginia (UVA). The COVID restrictions in place for the first 3 months of their stay meant that they had little in-person teaching or interaction with their peers, so the initial 1-year grant has been extended until July 2023. The prolonged stay will also give the monks an opportunity to meet a wider variety of people and communities who are not part of the university, including people who work in rural settings, factories, and the service industry.

Both Palden (4th from left, front row) and Lodoe (4th from right, front row) attended and volunteered at the 6th International Seminar of Young Tibetologists at the University of Virginia, August 2022

“Being exposed to other lifestyles could provide Palden and Lodoe with alternative frames of reference that will support their ability to lead and teach in the future,” said Ariana Maki, associate director of the Tibet Center and Bhutan Initiative at UVA. “At the same time, it may also be of use for them to engage with Americans who have no interest in Buddhism at all. If their career paths lead them toward teaching and living in the United States, getting exposure to people who will have a wide range of questions—and perhaps misconceptions—about Buddhism could be a useful exercise.”

Soon after their arrival, the monks registered for English classes at UVA’s Center for American English Language & Culture. They also joined the free conversation hours, called VISAS, in which people are matched with conversation partners from different countries and walks of life. “They organized various topics, many of which were new and not popular in monasteries,” said Palden. “For example, different wedding cultures around the world and LGBTQIA views. From these extra VISAS classes, I learned about many different backgrounds, lifestyles, multiple cultures, and beliefs.” 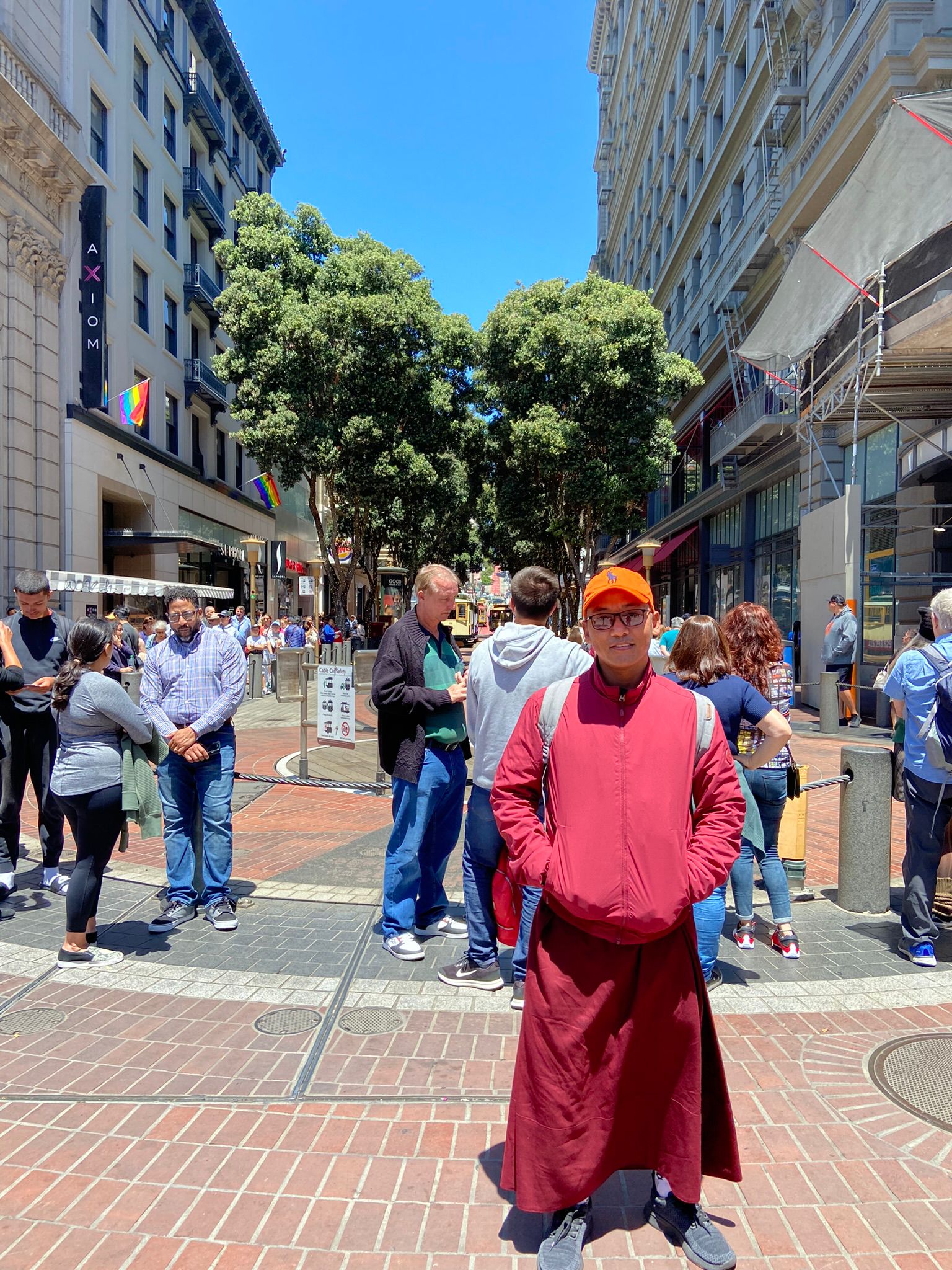 Lodoe on vacation in San Francisco

In the first semester Lodoe signed up for three classes in Buddhist philosophy—Introduction to Tibetan Buddhism, Introduction to Buddhist Philosophy, and Buddhism in America—that would help him integrate modern pedagogy into his own teaching. This fall, he has shifted his focus to the writings of modern academic Buddhist scholars and Western philosophers, and how to use this perspective in his teaching. He is also developing his writing skills. “I am also consistently well aware of what HE Dzongsar Khyentse Rinpoche has frequently advised regarding familiarizing myself with cultural diversities. UVA is a perfect institution to master those skills,” he said. He plans to use his extended stay at UVA to hone these abilities and to become more competent in translation in order to work for 84000.

Palden took the same three classes as Lodoe. “From these courses I learned some new ideas and skills on how to teach Buddhism in different fields. I [also] got a lot of opportunities to discuss various topics with many students, which helped me to know more about their way of thinking about religions and the meaning of life and so forth,” he said.

Both Lodoe and Palden attended discussions on Buddhist chaplaincy with Nyima Cape (aka Pema Khandro), then a PhD candidate in Buddhist Studies. “From her, mainly I learned about the trauma-informed approach, re-traumatization, how to listen to accounts of suffering and how to be active in listening, as well as about abuse… I noticed that in the West, abuse is a big topic and there are many types… I realized that these are also significant to know when I study Buddhist chaplaincy,” said Palden. He is eager to expand his understanding of American culture, the Western mindset, modern people’s way of thinking, and Buddhist chaplaincy in order to teach the dharma in the West.

We look forward to the time when Tsering, Jigme, Lodoe, and Palden will be able to fully use the language skills, cultural knowledge, and teaching methodology they learned during the program.