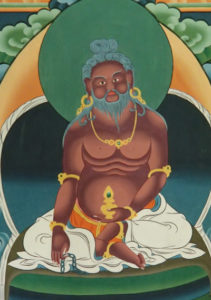 “Visualize in front of you a vajra made of meteoric iron. At its center is Thangtong Gyalpo, 900 years old, very beautiful, with red rosy cheeks, dark red, healthy, with a big belly and muscles. But to symbolize the nonduality of youth and age he should have white hair, mustache and beard, a long white beard. He is the one who built Tibet’s bridges and also created the Tibetan operas that we know.”

The 14th-century mahasiddha Thangtong Gyalpo was a busy man. His status in Tibetan and Bhutanese culture is unparalleled: He was a master of the highest Vajrayana teachings, in addition to displaying unparalleled skill as an architect, blacksmith, civil engineer, artist, writer of operas, and dispeller of epidemics. He is both a legend and a historical figure. Some records say that he was born in 1385 and instantly attained the age of 60 years. Most sources agree that he died when he was 125, having perfected secrets of longevity that practitioners can attain through supplication and prayer.

Rinpoche said in a recent teaching that Thangtong Gyalpo lived to be 900 years old, “but this 900 years old is very relative. Thangtong Gyalpo, depicted as an old man, with a white beard, nice white hair, really big, muscle-y, not frail — all of this has tendrel. Being a healthy old man brings the meaning of long life.  The white beard means wise. So by visualizing, praying, and supplicating, it creates this tendrel for the practitioner to receive this blessing of longevity.”

Born in Ölpa Lhartse in upper Tsang, Tibet, the historical figure Thangtong was a unique mahasiddha both because of his tremendous realization and his engineering accomplishments. He established incredible engineering marvels under challenging circumstances and over difficult terrain. Imagine a larger-than-life man like John Henry (an American legend who made railway tunnels through mountains with his hammer and huge forearms faster than steam-powered machines) combined with the wisdom of Padmasambhava, sitting astride a horse that he’d ride into shrine rooms. He became known as “the madman of the empty land.” In some Tibetan texts, he is reported to have been seen feasting just as easily on a long-dead and rotting horse as on delicacies.

It was because of his madman looks that one ferryman refused him passage across water to a holy site, and from this experience Thangtong Gyalpo had a vision of iron-chain suspension bridges that any pilgrim could cross.  To build such a bridge, he would need to learn metallurgy to create durable links, study engineering to span unpredictable rivers and deep gorges, and raise funds to buy the iron ore and pay for labor.

Thangtong Gyalpo developed a method of smelting iron to create enormous chain links that remain untarnished to this day. Many of the 58 suspension bridges that he built are still in use in Bhutan and Tibet. He opened the route through the land of Kongpo aborigines,  where he obtained iron for his bridges and rights of passage for Tibetan pilgrims to visit the holy places in Tsari to the southeast of Dakpo, near the Indian border. Many practitioners pray to him when they are seeking strength and connections. He also designed and built many large and unusual stupas across Tibet and Bhutan, including the great Kumbum Chörten at Chung Riwoche, and established Gongchen, a Sakya monastery in Derge.

It is said that Thangtong Gyalpo used his skills as a performing artist to raise money for his projects. He established Tibet’s first dharma theater troupe, which performed operas, recited mantras, and told stories that were meant to subdue demons and teach sentient beings . Today, Bu chen (“Great Sons”) performers in Tibet consider Thangtong Gyalpo the founder of Tibetan opera. They often perform a sword dance that ends with breaking a stone to reenact Thangtong Gyalpo’s triumph over an epidemic-causing demon. After flying to Lhasa on a white-tailed eagle, he trapped the demon inside a stone that he carried into the marketplace and split open with a rock shaped like a ritual dagger.

Thangtong Gyalpo is considered to be an emanation of Manjushri, and he prophesied the birth of Jamyang Khyentse Wangpo:

The yogi who is not separate from me,

Who possesses the five qualities

Within seven hundred years will be born…

In this way, the Khyentse lineage is united with Thantong Gyalpo.

When Khenpo Kunga Wangchuk first came to India, one morning he came to me, and he was very happy. He said “I had a strange dream that a monk came to my room and stole some very precious stuff.” Khenpo ran after him and caught him. When he turned him over he saw this monkey in a robe and it was kind of scary looking; and Khenpo scolded him saying, “Give me back everything you just took!” The monkey finally pulled out a Thangtong Gyalpo statue, and Khenpo said, “This must be you, Rinpoche, because you are the reincarnation of Thangtong Gyalpo; so I think weʼre going to be all right.” So sweet! I almost wanted to paint this on the wall of Dzongsar Institute.

After Thangtong Gyalpo passed away, a lineage was established. The current tulku of Thangtong Gyalpo is a 22-year old Bhutanese. He is currently in three-year retreat at Rinpoche’s home in Paro. Under Rinpoche’s guidance he has done intensive study and practice for several years. He oversees a nunnery in Thimphu.