Honoring a Collaboration for the Ages 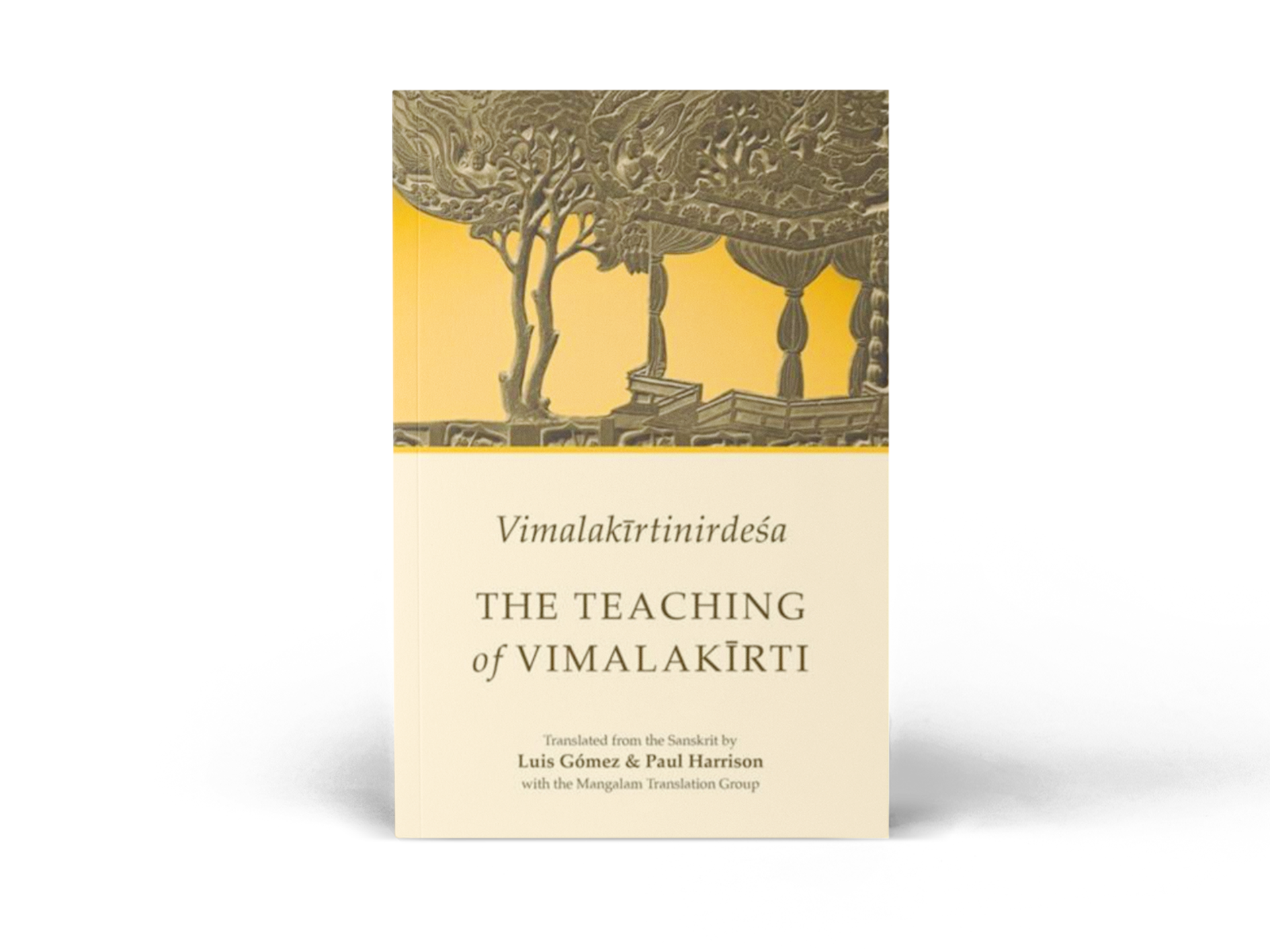 This year’s Khyentse Foundation Prize for Outstanding Translation is awarded to Professor Luis Gómez and Professor Paul Harrison for their teamwork on Vimalakīrtinirdeśa: The Teaching of Vimalakīrti, An English Translation of the Sanskrit Text Found in the Potala Palace, Lhasa (Berkeley: Mangalam Press, 2022). 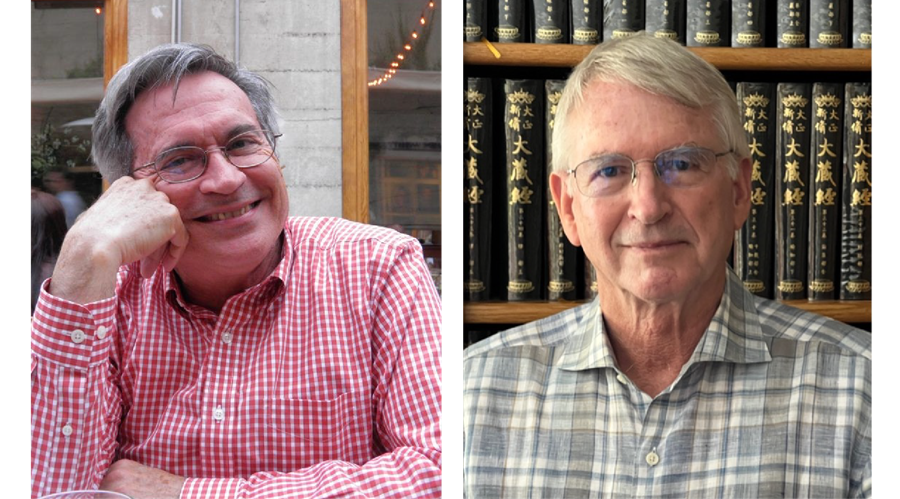 Dr. Jan Nattier, an eminent scholar of Buddhist studies, is serving as this year’s nominating member on the KF Prize for Outstanding Translation committee. Here’s what she says about the translation of the Vimalakīrtinirdeśa.

“When word of the discovery of a Sanskrit manuscript of the Vimalakīrtinirdeśa began to circulate in the early 2000s, it sent shock waves throughout the Buddhist Studies world. Long known only in its Chinese and Tibetan translations, leaving scholars to guess what its original Indian terminology might have been, this highly influential text could now be consulted in an original Indic-language version.

“The news that Paul Harrison and the late Luis Gómez had embarked on a project to translate the newly discovered Sanskrit text was thus greeted with widespread enthusiasm. These two scholars, both leading figures in the field of Mahayana sutra literature, were uniquely qualified to produce a translation of this important text. The two worked on the translation over a period of several years, discussing and debating the rendition of every term. After Luis’s passing, Paul brought the project to completion, and the fruits of their joint labors are now available in print.”

The long collaboration between the two scholars in bringing this important work to fruition is a touching story of mutual trust and respect, confidence, and devotion in a lifelong friendship. Paul Harrison shared with us his memories of their meeting and collaboration.

“When I set out in the field of Buddhist Studies, Luis Gómez was a respected senior colleague, whom I regarded as far above my level. He even interviewed me once for a job (which I didn’t get!). Over the years I got to know him better, and our relationship became one of colleagues. It is Vimalakīrti, however, whom I have to thank for making us friends. Working on this translation together with Luis was one of the most satisfying and enjoyable intellectual experiences of my life, in part because I got to know him so well. In the introduction to the book I say quite a lot about how our collaboration worked, since I found it so interesting in itself, but it is hard to convey in words the joy of working alongside someone with a great mind and a great heart. Or the regret when it is no longer possible. 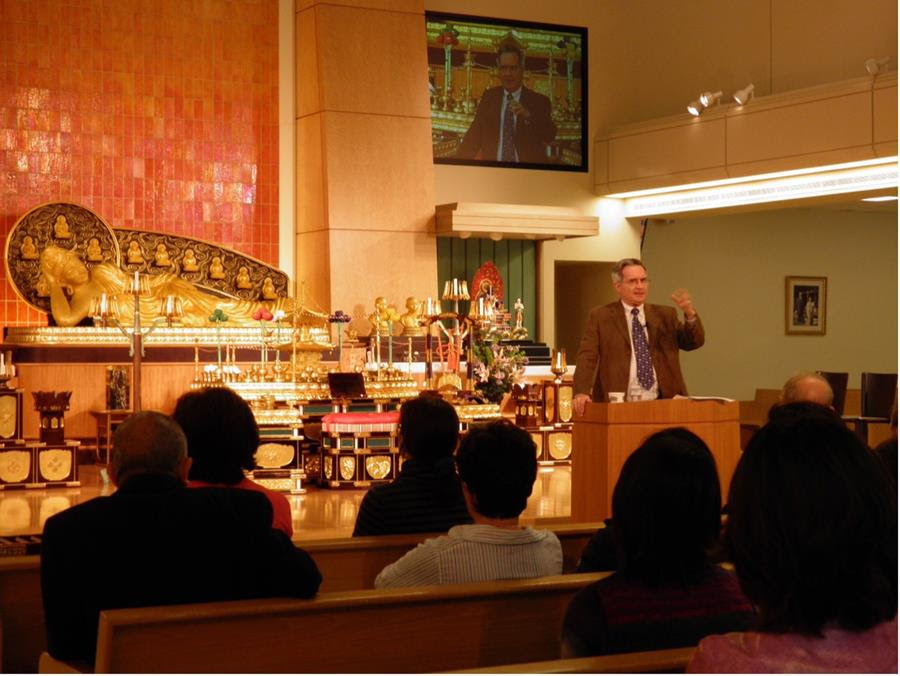 “As Paul says, The Teaching of Vimalakīrti is the result of a vision and an example of great teamwork. I remember the [2010] workshop sponsored by the Mangalam Research Center for Buddhist Languages and its director, Jack Petranker, full of enthusiasm … then Paul and my beloved husband having a Skype session every week, enjoying their conversation while searching for the perfect translation of each term—sometimes they spent hours agreeing on the correct word. I am deeply grateful to Paul Harrison for his commitment to completing the work and to Mangalam Center for their sponsorship in publishing the book.

“I am sure that, wherever Pure Land is, Luis lives there now, and he is receiving this acknowledgment from Khyentse Foundation with his warm smile. Please extend my gratitude to Dzongsar Khyentse Rinpoche, Professor Peter Skilling, and the selection committee: Professors Jan Nattier, Charles Hallisey, Natalie Gummer, and Jaqueline Stone, for this prize.”

A distinguished scholar of Buddhism, Luis Gómez passed away in Mexico City on September 3, 2017. At the time of his death, he was professor emeritus of Asian Languages and Cultures at the University of Michigan. He had retired from the faculty on January 1, 2009.

Luis’s scholarship on Buddhism covered a remarkable range of important topics over his career, including Indian, Tibetan, Chinese, and pan-Asian Buddhism, with a particular emphasis on the literature and religious vision of the Mahayana. He wrote a number of groundbreaking articles devoted to the “sudden vs. gradual” dichotomy both in early Chinese Chan and at the Samye Debate in Tibet. Among his books, The Land of Bliss: The Paradise of the Buddha of Measureless Light (Honolulu: University of Hawaii Press, 1996) is considered the definitive study of the highly influential Buddhist scripture, the Sukhavativyuha Sutra. He also published extensively in Spanish.

Read the whole article on the life and work of Professor Luis Gómez by Donald Lopez and Paul Harrison.

Paul Harrison is George Edwin Burnell Professor of Religious Studies at Stanford University, where he has taught since 2006. Educated in his native New Zealand and in Australia, he specializes in Buddhist literature and history, particularly of the Mahayana, and in the study of Buddhist manuscripts in Sanskrit, Chinese, and Tibetan. He has edited and translated several Mahayana sutras, and has published numerous journal articles on Buddhist sacred texts and their interpretation. He is also one of the editors of the series “Buddhist Manuscripts in the Schøyen Collection.”

Paul’s current projects include editions, translations, and studies of Mahayana and Mainstream Buddhist sutras and shastras, including the Vajracchedika (Diamond Sutra), Lokanuvartana (Sutra of Conformity with the World), and Shikshasamucchaya (Compendium of Training).

Paul serves as co-director of the Ho Center for Buddhist Studies at Stanford.

Professor Paul Harrison will offer a lecture on this book in our next Goodman Lecture on September 17: “What Can We Learn From the Teaching of Vimalakīrti?” Registration is open now.

The annual Khyentse Foundation Prize for Outstanding Buddhist Translation was set up in 2011 to encourage and honor excellence in translation works that make the Buddhist heritage accessible to a broader public. Nominated works must have been published in the preceding 2 years and can include works of translation into English from any of the main classical languages of Buddhism: Pali, Sanskrit, Tibetan, or Chinese. The translation can of be a sutra, commentary, treatise, biography, history, liturgy, or practice manual from any tradition of Buddhism. Read more about the prize and previous winners on the KF Awards page.