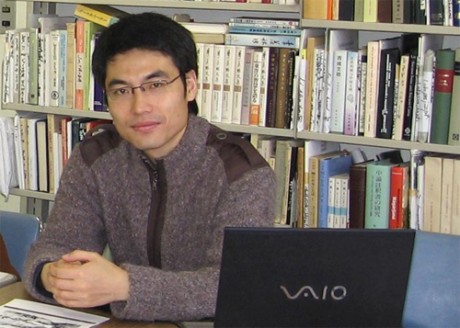 As many of Rinpoche’s student’s know, the study of Madhyamika is considered essential to understanding the Buddhist view. Madhyamika, the middle way philosophy, teaches freedom from all extremes. Although the philosophy of Madhyamika is one of the most influential in the history of Buddhist thought, not many Sanskrit manuscripts of its texts have survived until today.

Dr. Ye Shaoyong, a lecturer in the Department of South Asian Studies at Peking University, was awarded a Khyentse Foundation grant to publish his PhD dissertation, which presents critical editions of two newly identified Sanskrit manuscripts. Dr. Ye’s dissertation, titled The Mūlamadhyamakakārikā and Buddhapālita’s Commentary: A Philological Study on the Basis of the Newly Identified Sanskrit Manuscripts, is a significant contribution to the preservation and study of the Madhyamika School. (The Mūlamadhyamakakārikā is a Sanskrit verse text composed by Nāgārjuna in the second or third century.)

Dr. Ye discovered the Sanskrit manuscripts, written on 14 palm leaves, while checking microfilms of manuscripts from Tibet. The Mūlamadhyamakakārikā identified by Dr. Ye is the only currently available manuscript of this text and is probably the oldest Madhyamika text yet identified. Buddhapālita’s commentary on the Madhyamika, which was written in the fifth or sixth century, is the only work of Buddhapālita that survives today.

The two manuscripts were in such poor condition that it took Dr. Ye two years to finish the editions and reconstruct the gaps. Altogether they contain approximately 150 verses, or about a third of the Mūlamadhyamakakārikā. According to Dr. Ye, “Coming from separated stemma and reflecting readings as early as the sixth or seventh century, these textual witnesses inject fresh blood into the materials of the Madhyamaka study.” (A stemma is a family tree of manuscripts, showing which manuscripts were copied from each other.)

With the aid of the Khyentse Foundation grant, Dr. Ye was able to publish his PhD dissertation.