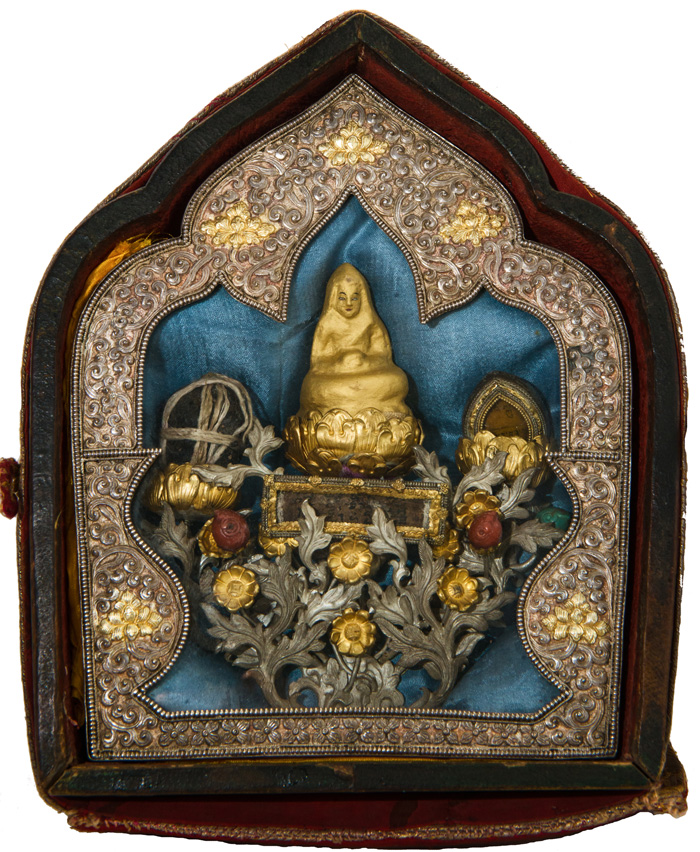 This kutshab (physical representation) of Guru Rinpoche was discovered by Jamyang Khyentse Wangpo and is his central terma (treasure teaching). Although it is simple in appearance, this statue is one of the great treasures of the Khyentse lineage.

When Jamyang Khyentse Wangpo (1820-1892) was in lifelong retreat in Dzongsar Monastery, he had repeated visions of a treasure teaching, but he couldn’t break his retreat to retrieve it. He had a second set of visions of a great terton (treasure revealer) coming to Dzongsar and told his attendants to expect this master imminently. He waited by the window overlooking the courtyard (which still exists today), but no one came. After waiting many long days, he summoned the monks and asked if anyone had arrived. They told him that the only visitor in all this time was a homely yak herder. Jamyang Khyentse Wangpo requested them to bring this herder to him immediately. With great joy, he instantly recognized that this was the person he had been waiting for.

Jamyang Khyentse Wangpo told the yak herder that he had a favor to ask: There was an item he needed to retrieve but because he was in lifelong retreat he needed someone to go in his stead. He gave explicit instructions about where to go, what kind of horse to take, where to spend the night along the way, and even what to eat. The yak herder headed out, crossing mountains and valleys and spending many nights under the stars. Finally, from the top of a tall mountain, he saw in the far distance a Guru Rinpoche statue the size of a mountain. As he approached, the statue became smaller and smaller. When he reached out to touch it, it became so small that it fit in the palm of his hand.

The yak herder brought the kutshab back to Dzongsar and gave it to Jamyang Khyentse Wangpo, who was so thrilled that he made a great throne and crowned the herder as Chogyur Lingpa. From the dakini script at the bottom of the kutshab came many volumes of teachings such as Sampa Lhundrup, Fulfiller of All Aspirations, and many other Guru Rinpoche practices of the Khyentse lineage.

Jamyang Khyentse Wangpo wrote a history of the creation and significance of this kutshab that explains how it came to be. Toward the end of Guru Rinpoche’s time in Tibet, Mutri Tsenpo, the son of King Trison Deutsen, was king. Because Guru Rinpoche had achieved vajra body at Maratika, he had outlived many of his disciples, including King Trison Deutsen himself. He told Mutri Tsenpo that it was time for him to leave Tibet to tame the rakshasas. With a heavy heart the king accompanied Guru Rinpoche for some distance to bid him farewell. As they parted, he began to cry like a child. Guru Rinpoche consoled him, saying

When you meditate, that meditative state is my mind,
When you read the scriptures that is my speech.

Then he scooped up some earth in his fist and said

Mutri Tsenpo immediately realized the significance of this spontaneous statue and hid it for safekeeping. The bond between Guru Rinpoche and Mutri Tsenpo lasted through lifetimes until they met again in the bodies of Jamyang Khyentse Wangpo and the yak herder who became Chogyur Lingpa.

This most important terma of the Khyentse Lineage is kept in the Khyentse labrang in Bir. It is taken out every time Rinpoche gives an important empowerment. Many were blessed by it at the Dam Nyak Dzo empowerments and the recent wangs in Takila and the drupchen in Bumthang. It is said that once someone is blessed by this statue he or she is guaranteed enlightenment within 7 lifetimes.

Every 12 years, in the year of the monkey, the custodian of the kutshab is entitled to make more kutshabs. Dzongsar Khyentse Rinpoche, the current holder, made such statues three times this year, taking great care with every aspect of the ceremony, from the preparation of the mud to setting the atmosphere to the actual creation. Here is an image of that special last night in Takila, after the successful completion of more than a thousand empowerments.