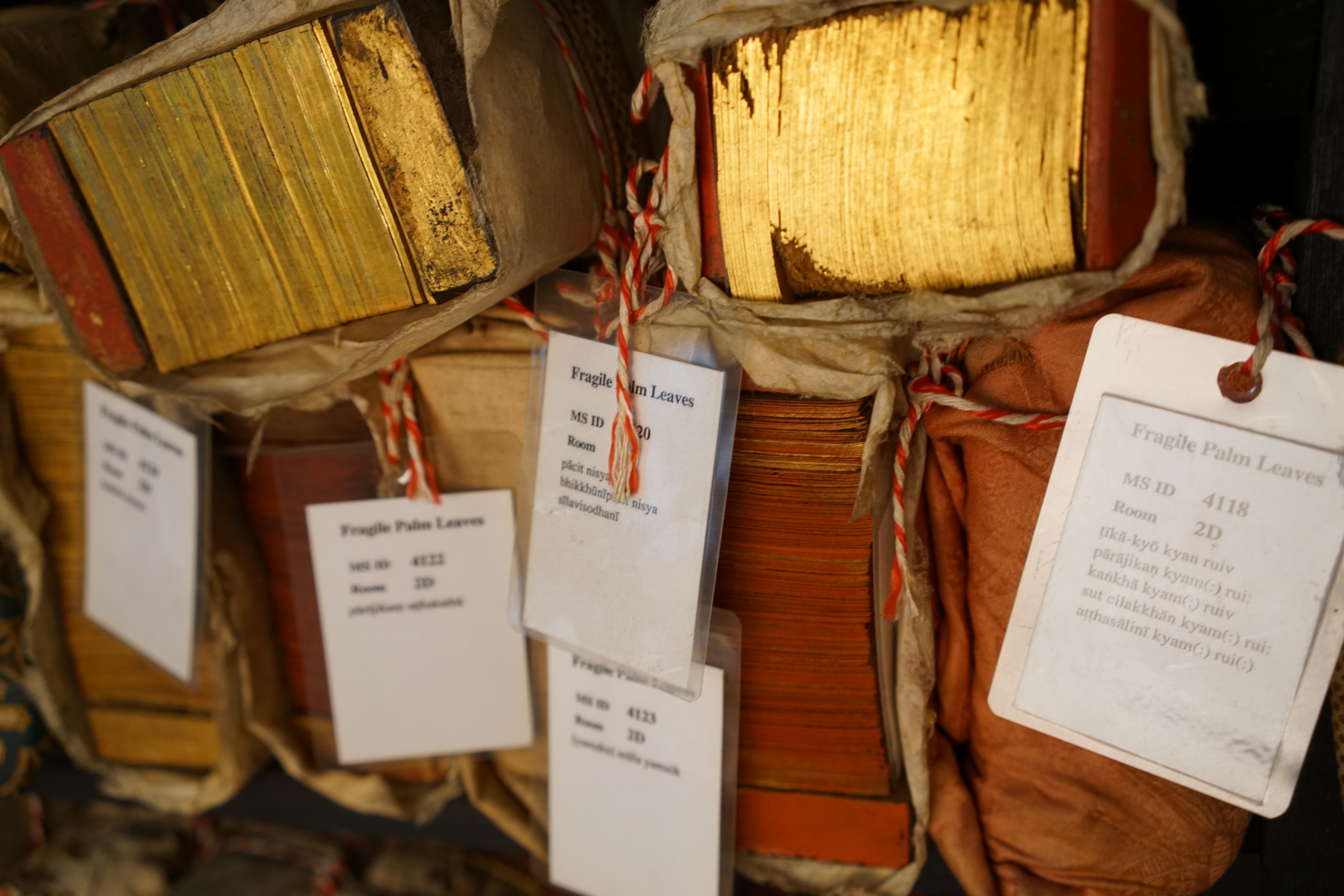 Professor Peter Skilling, a KF Advisor and Fellow, is one of the leading scholars of the Buddhist history and literature of South and Southeast Asia. He has lived and worked in the region for nearly five decades. In 1994 he founded the Fragile Palm Leaves Foundation (FPL), which archives one of the largest collections of palm-leaf manuscripts in Pali and Southeast Asian languages including Burmese, Mon, Shan, Khun, Lue, and Thai. This issue of KF Focus brings you an update on the digitizing and cataloguing of these rare, valuable, and delicate palm-leaf manuscripts carried out by the Buddhist Digital Resource Center. It also describes the academic activities and other amazing work happening at FPL despite the prolonged pandemic.

Dzongsar Khyentse Rinpoche’s visit to the FPL collection in the late 1990’s was a momentous occasion. As recounted by Prof. Skilling, “Rinpoche respectfully put his head to the manuscripts repeatedly as he toured the shelves. Ever since then, FPL has enjoyed Rinpoche’s spiritual support.” 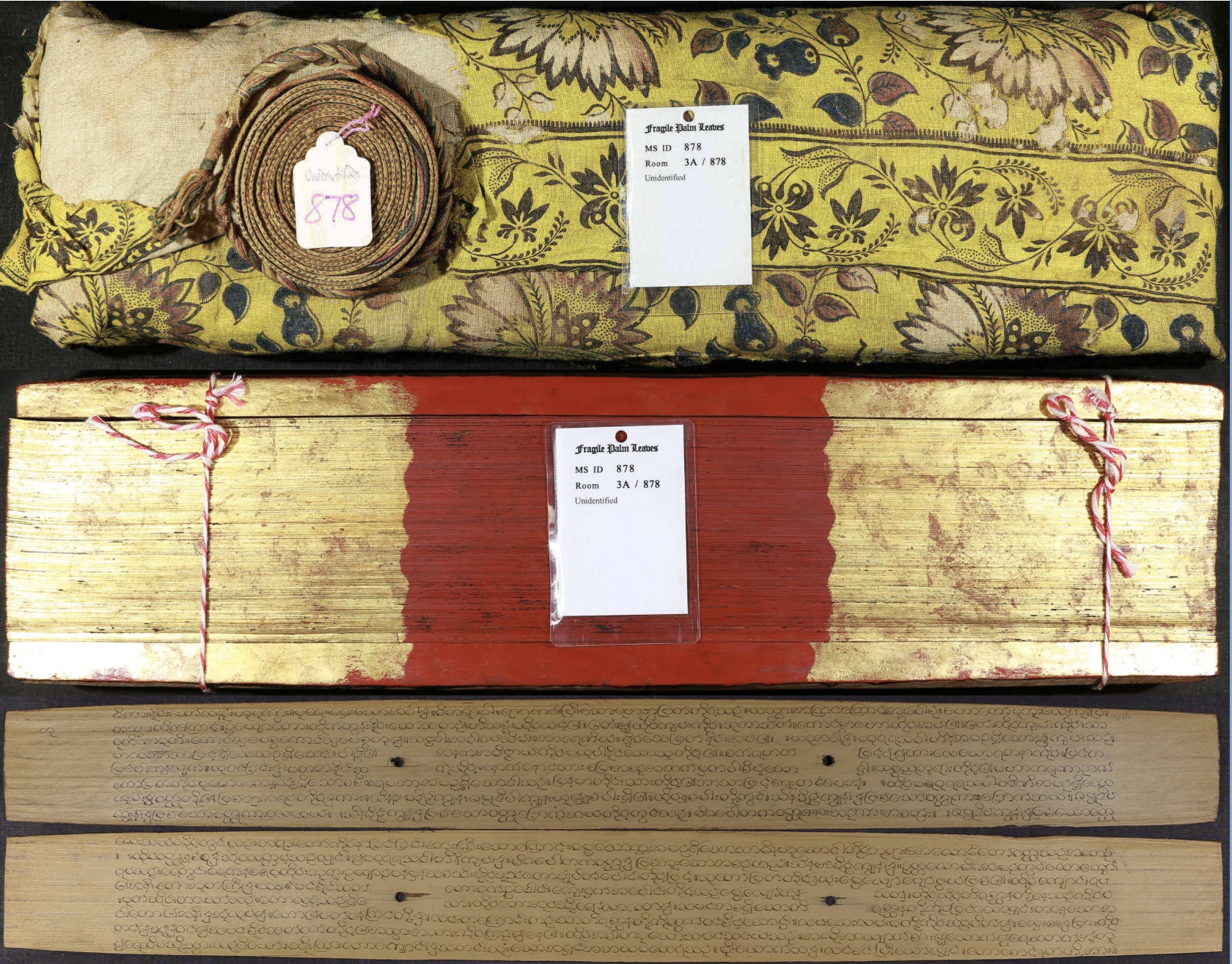 Beginning in 2016, with the support of Khyentse Foundation, the Buddhist Digital Resource Center (BDRC) began digitizing and archiving FPL’s incomparable collection of Theravāda texts in Nonthaburi, Thailand. This effort expanded into a multiyear project to establish a full-scale digitization center at FPL, with the long-term goal to digitally archive nearly 11,000 Burmese manuscripts and make them freely available online. By June of 2021, the end of the fourth year of the project, BDRC has digitized 5,673 volumes and currently offers full and complete access to 5,411 volumes online, containing more than 1 million images and 2 million pages of text.  With 52% of the FPL Burmese collection digitized, BDRC has met a major milestone in the project.

Image above from top to bottom: Three views of a palm-leaf manuscript: In its wrap, in the bundle, and two palm leaf folios

The origin of the collection dates back to the early 1990s. The late Gene Smith, founder of BDRC, and Peter Skilling heard reports of Buddhist manuscripts being sold in the markets of Northern Thailand and the neighbouring countries. Traveling to Kengtung, Burma, they were alarmed to find baskets of palm-leaf manuscripts being sold as souvenirs. Saddened by the potential loss of these manuscripts, and with the support of like-minded colleagues, Peter Skilling launched a preservation effort that led to the creation of the Fragile Palm Leaves Foundation and its unique collection of texts.

FPL now holds an immense collection of rare and unstudied palm-leaf manuscripts. The collection contains 10,896 bundles of Burmese-style palm-leaf manuscripts and 5,210 uncatalogued manuscripts in various scripts. These precious texts are at risk of rapid degeneration, and the best way to protect them is through careful and efficient digitization. One can arguably say that no one does a better job of preservation and digitizing than BDRC.

Read more about the history of BDRC

Images above from left to right: Carefully cleaning a palm leaf before scanning; the scanning team; a scanning station at FPL

BDRC has set up a robust scanning operation at FPL. It regularly syncs the local storage system at FPL with its home office storage system and then publishes the data to its online library. As the Covid pandemic expanded, last year the core staff of the local scanning team moved to the immediate vicinity of the scanning office, so they were able to keep the scanning work going without much interruption.

The Challenge – Cataloguing the FPL Collection

Cataloguing the FPL collection is as important as digitizing it. The existing FPL catalogue is incomplete and was done in a basic descriptive format, which limits access to the texts and their usefulness to researchers. BDRC has begun an intensive effort to update and improve the catalogue. In 2020 they engaged two scholars to validate and correct existing metadata, enhance the catalogue with additional metadata, and collaborate on the development of a systematic cataloguing structure that works with BDRC’s linked Open Data BUDA platform. During the first quarter of 2021, a metadata template was developed that fits both the scholarly and technical needs of the project. Actual cataloguing work began in the second quarter of 2021. 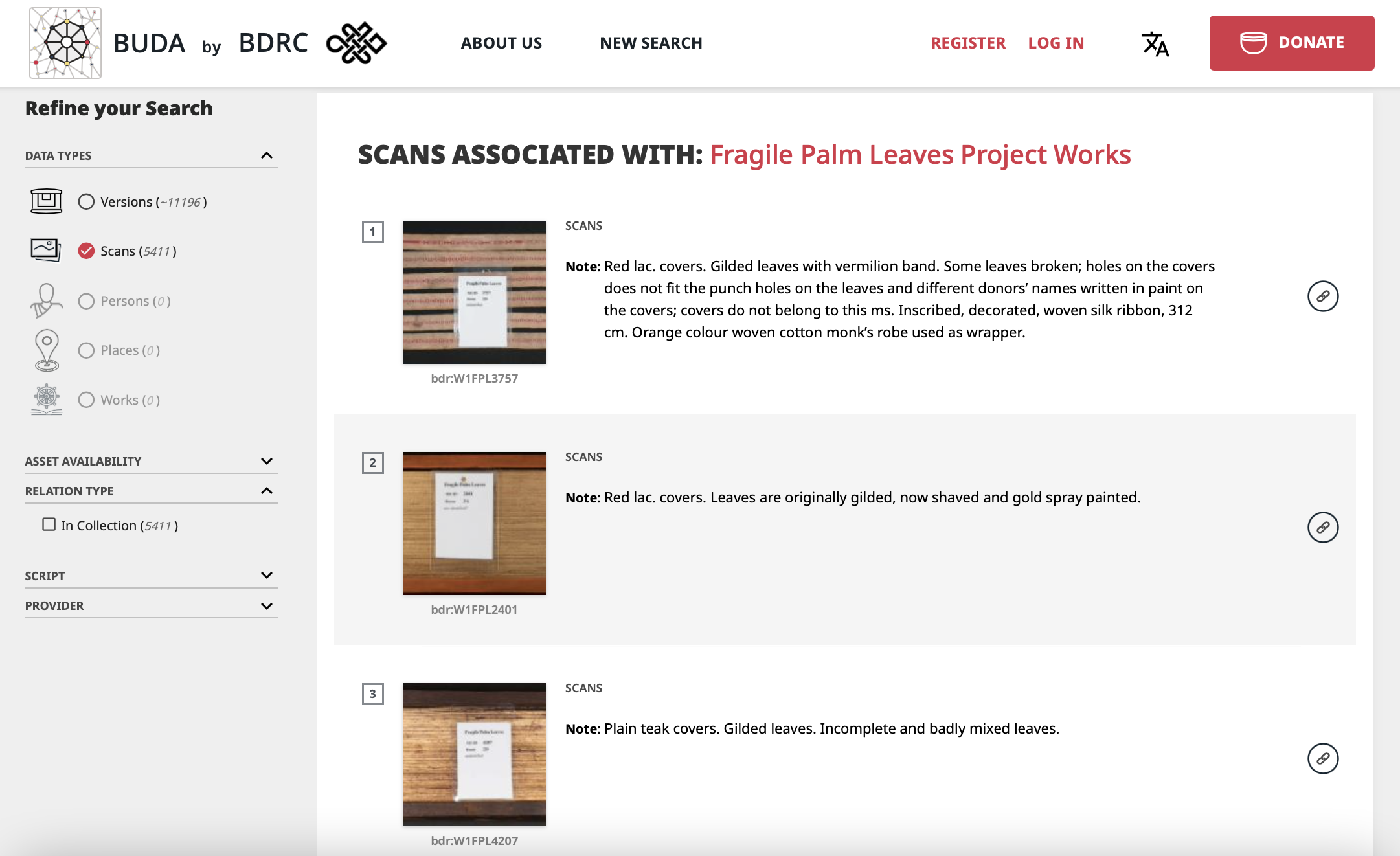 The Rich Heritage of the FPL Collection

“BDRC’s digital archive of the Fragile Palm Leaves collection heralds a revolutionary contribution to Buddhist studies. It is the world’s largest online repository of Pali and Burmese Buddhist manuscripts, preserving access to these endangered, critically significant textual and codicological traditions for generations of scholars to come.”

— Christian Lammerts (Rutgers University, Department of Religion), one of the foremost scholars of Burmese manuscripts in the United States

The majority of the Burmese Pali texts in the FPL collection date from the 18th and 19th centuries. The texts cover a variety of topics, including law, poetry, stories of the Buddha, grammar, and religious rituals. Manuscripts such as these are the primary sources for the study of Burmese and Theravāda Buddhism, Pali philology, history, literature, and more.

The vast majority of the FPL collection is the cultural property of the Burmese people. The digitization is, in a way, an opportunity to “return” the texts to the them. FPL and BDRC hope that one day it will become possible to collaborate with scholars, monks, and cultural heritage professionals in Burma to promote the study of the texts and increase access to the digital copies in the online library.

Another series currently being compiled is the Pali Compositions of King Mongkut (Rama IV, 1804–1868) to celebrate the 200th anniversary of his ordination as a monk in 1824. King Mongkut, who may be best know in the West through the Hollywood classic “The King and I”, was in fact a devout Buddhist who spent 27 years as a monk before ascending to the throne in 1851.

Academic Publications and Other work at FPL

Professor Skilling and his colleagues continue to lead academic programs at FPL in these difficult times. Some of the activities had to be shifted to online, yet FPL is making steady progress, and some significant projects are on the horizon.

FPL continues its Materials for the Study of the Tripitaka (MST) Series, published jointly with Lumbini International Research Institute (Lumbini, Nepal). Volumes 16 and 17 were published in 2021, enriching our understanding of the Pali literature of Thailand and the history of the Pali scriptures. 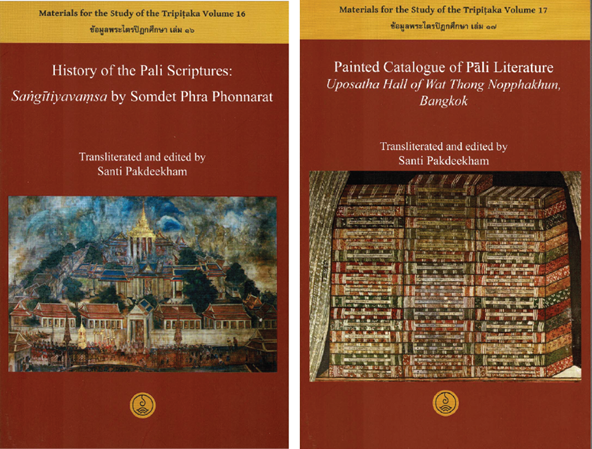 MST Volume 16 is the Pali text Sangitiyavamsa, a history of the Pali scriptures, edited and with an introduction by Santi Pakdeekham.

MST Volume 17 is a beautifully illustrated study by Santi Pakdeekham, The Painted Catalogue of Pali Literature: Uposatha Hall of Wat Thong Nopphakhun, Bangkok. Santi, Peter Skilling, and the FPL team have been working on this project for almost 10 years.

Santi and Peter are preparing a volume that contains the Pali texts of several historical works, or “biographies,” of important Buddha images. Two more volumes are under preparation by General Editor Claudio Cicuzza. One is a collection of papers, the Proceedings of the Second International Pali Week in Paris (2016). The other is an edition of a Pali text called Vajirasarasangaha by Javier Schnake (Paris). Both volumes will contribute to our knowledge of the little-known Pali texts of Southeast Asia.

Another series currently being compiled is the Pali Compositions of King Mongkut (Rama IV, 1804–1868) to celebrate the 200th anniversary of his ordination as a monk in 1824. King Mongkut, who may be best know in the West through the Hollywood classic “The King and I”, was in fact a devout Buddhist who spent 27 years as a monk before ascending to the throne in 1851.

Image below: The MST series, to date 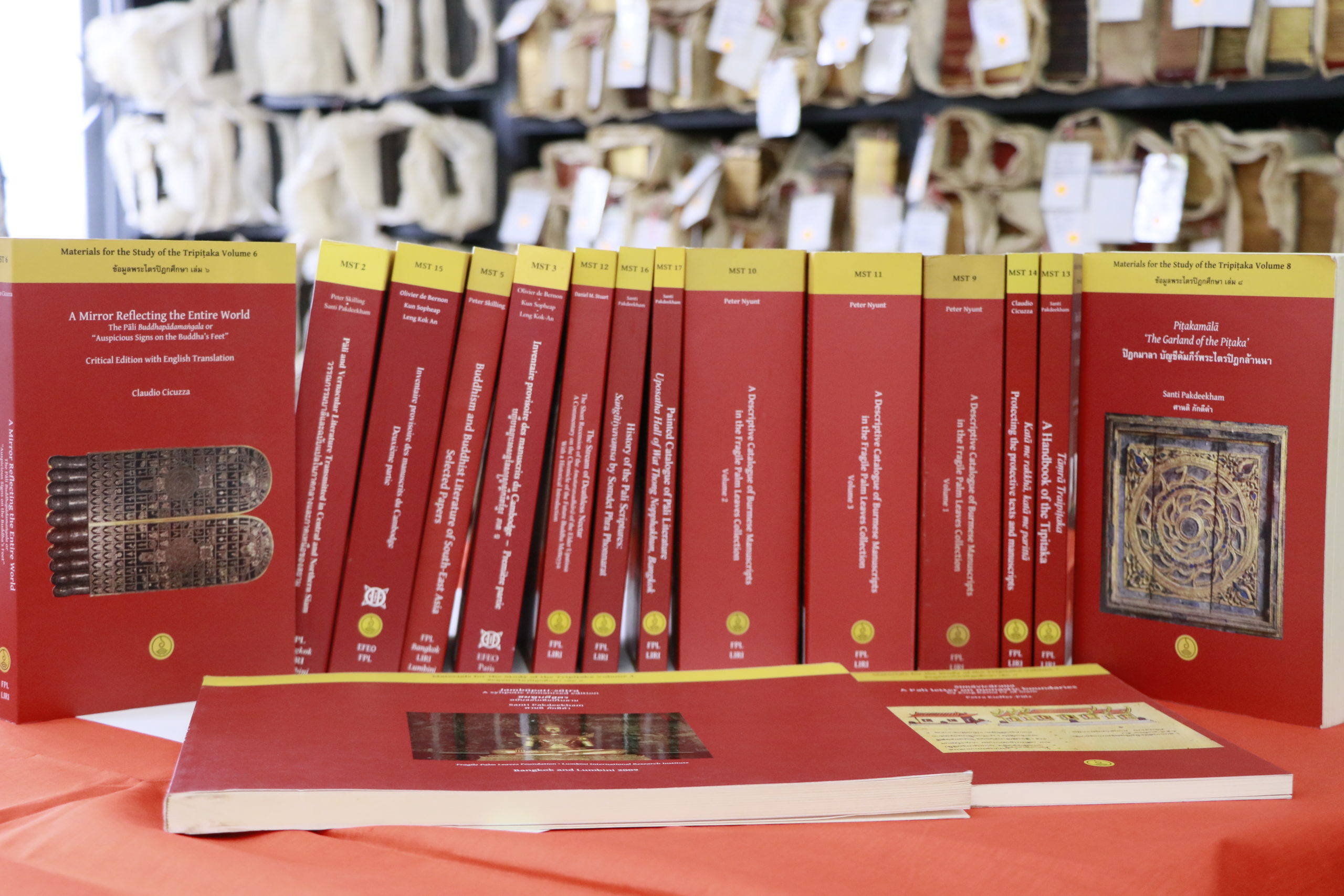 FPL’s biggest project so far is a resource book, Early Pali Inscriptions of Thailand. Peter and Santi have been collecting the inscriptions for more than 20 years. The project entails photographing inscriptions in the provinces and making rubbings (estampages) when possible. The inscriptions are kept in museums and temples around the country. In each case, the work involves getting permissions and then traveling to the sites. FPL has already collected about 70 inscriptions and prepared a preliminary study.

Another ongoing FPL project is to visit temples in Thailand to document and digitize the murals and other valuable artifacts. Last year, operations of the FPL field team were suspended, but the team is counting and assessing the manuscripts in the Tai Khuen script and language. Khuen is a member of the Tai language family that is closely related to Northern or Lanna Tai and is written in a similar script.

Image below: A painting at War Don Krabeua, Rajburi province, depicting the Buddha’s nirvana on a seven metres high wooden panel, from the late 19th century. Photographed and scanned by FPL team. 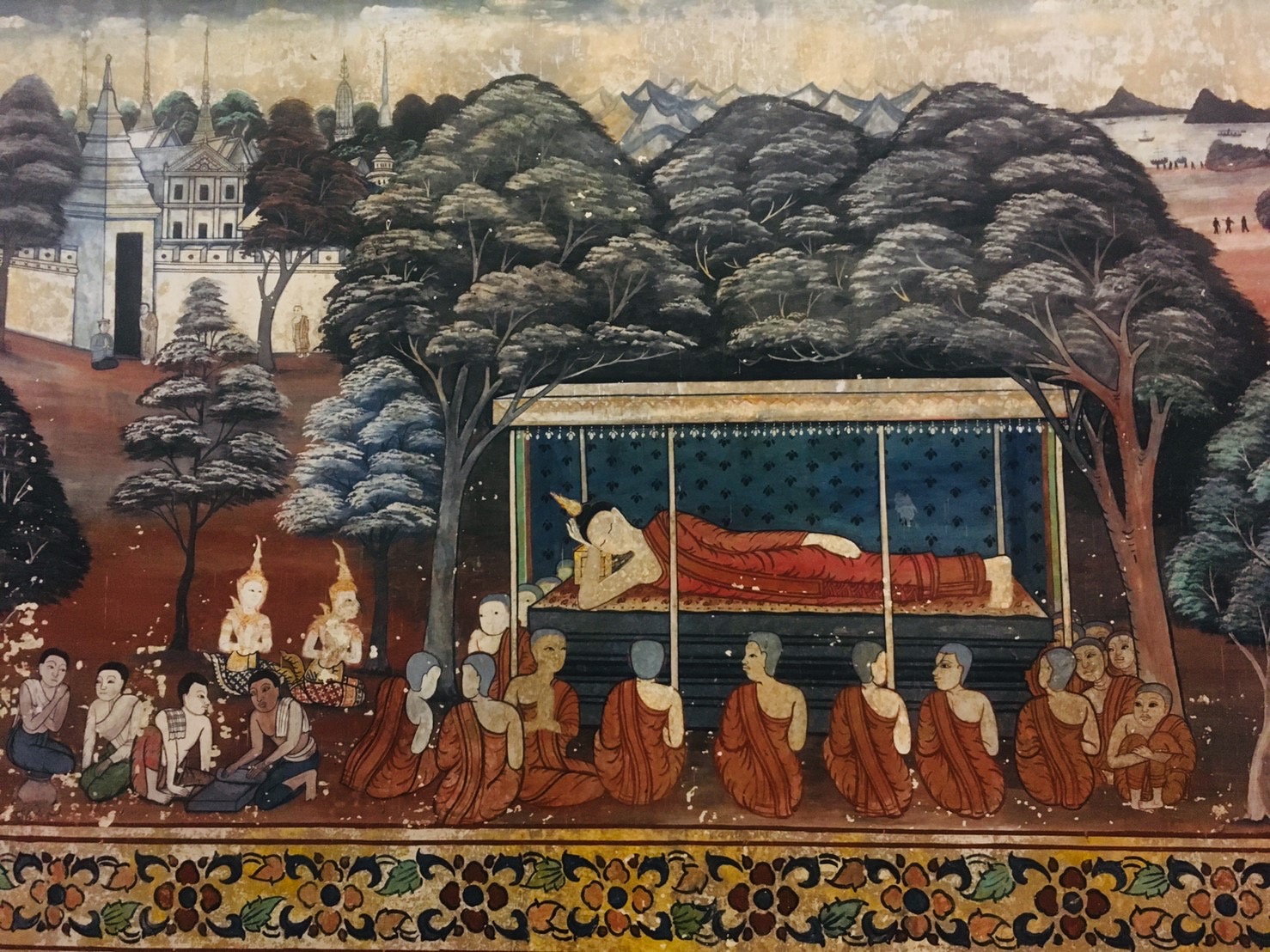 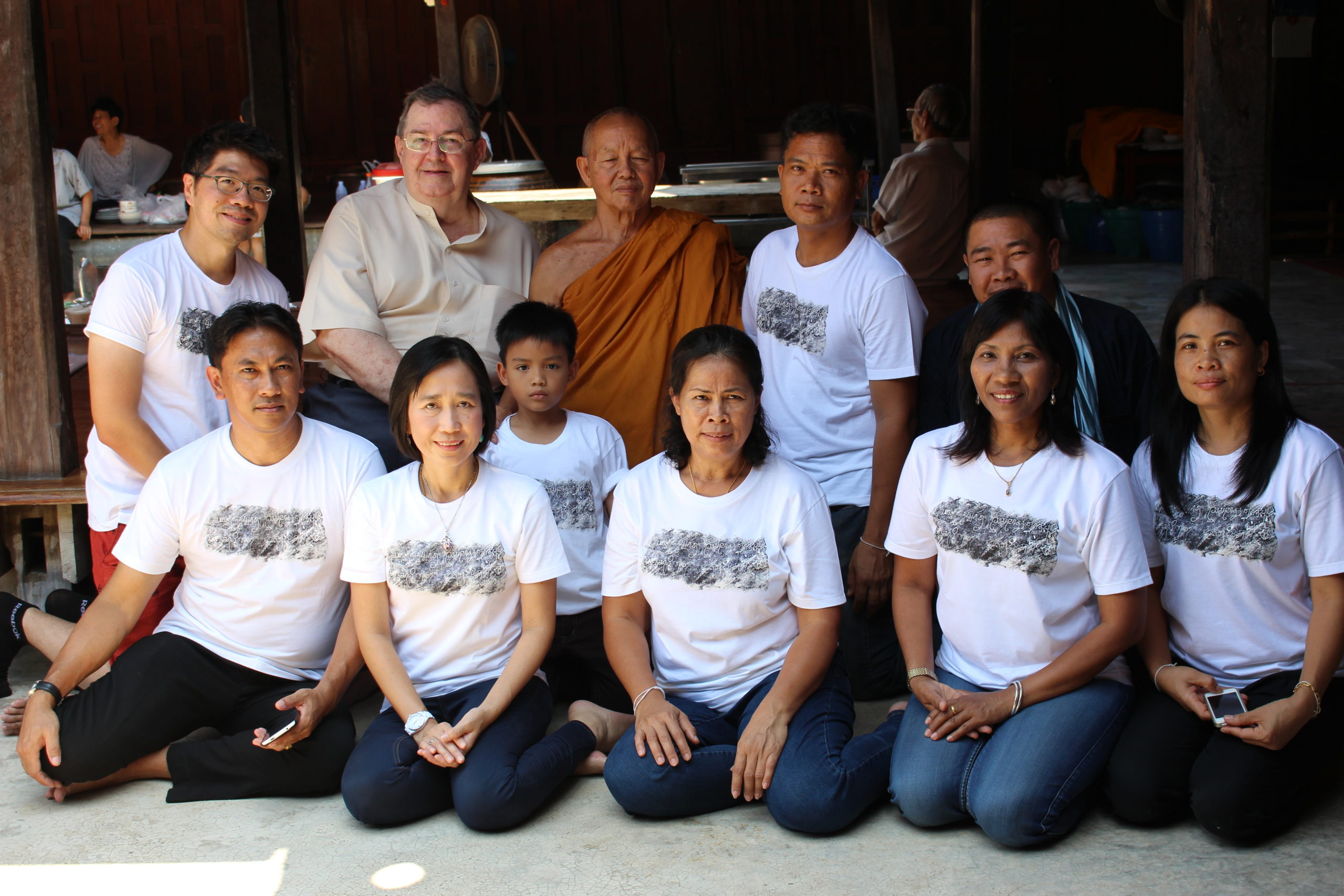 Image above: Peter Skilling with the abbot of Wat Pak Khlong, Phetchaburi, and the FPL field team in T-shirts printed with the Ye dhammā hetuppabhvā stanza inscription rubbing, 2015

Peter has been busy during the pandemic. On October 1, 2020, he received an Honorary Doctorate in Arts from Chulalongkorn University, where he continues to work with university colleagues and supervise PhD students. One of his students, Eng Jin Ooi, from Penang, Malaysia, received his PhD at Mahidol University for a pioneering study of Pali manuscripts of the Questions of King Milinda. Eng Jin will also help FPL with several research programs.

Although all of his scholarly trips have been cancelled since 2020, Peter has given a number of online lectures, including lectures for the students at Fudan University in Shanghai and Pune University in India. His research continues through email and telephone with colleagues in India and China. 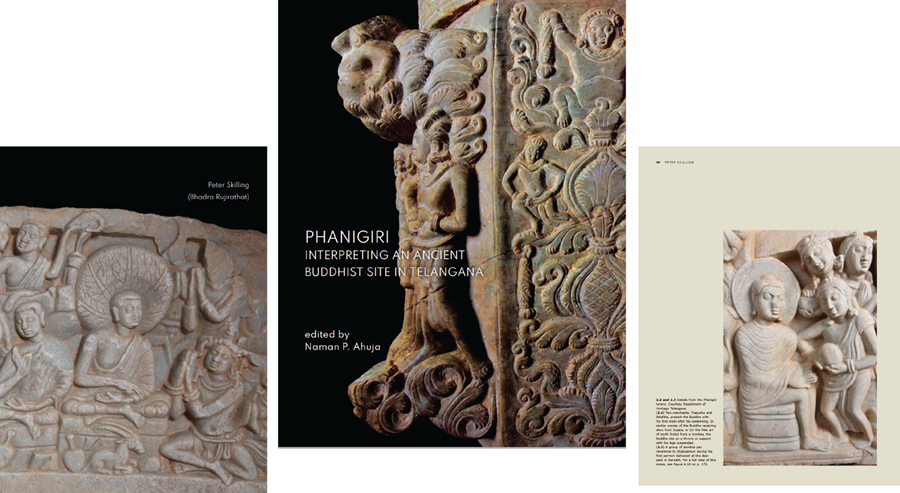 Peter’s book of translations, Questioning the Buddha, A Selection of Twenty-Five Sutras, was published by Wisdom Publications in August 2021.

“In this volume, prose and verse join beautifully to celebrate the Dharma. The selections show how rich, how diverse, and how wonderful the Kangyur is — and how little we know about it.”

— From the foreword by Dzongsar Khyentse Rinpoche 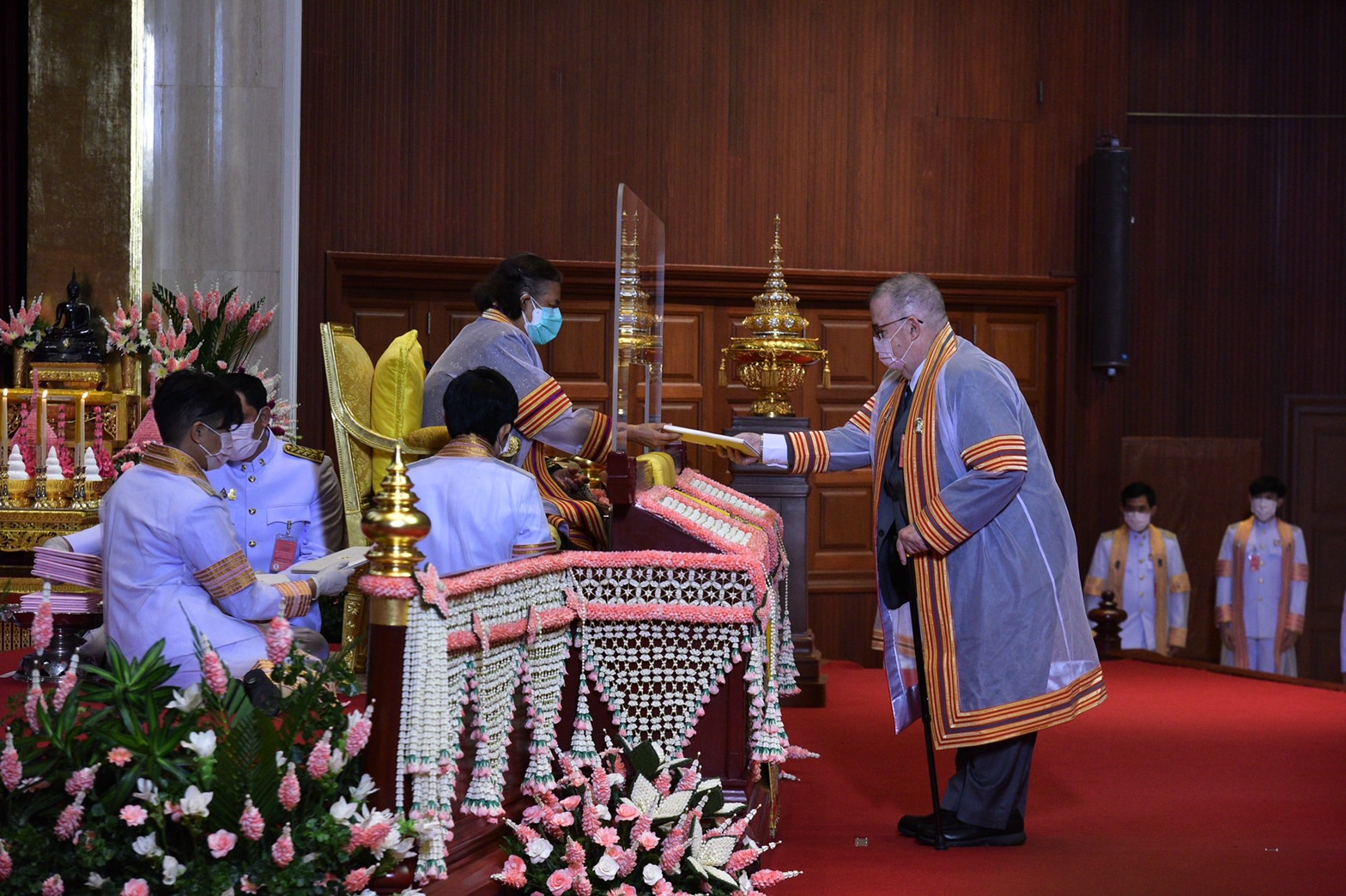 Professor Peter Skilling has served as an advisor to Khyentse Foundation since 2007 and has provided wise guidance in the foundation’s growth, especially in the development of ideas relating to academia, scholarship, and translation projects. He has initiated many successful KF projects, including the KF Award for Excellence in Buddhist Studies, the KF Outstanding Translation Award, and the KF PhD Dissertation Award. Peter received the Khyentse Fellowship in 2012, the highest personal honour the foundation grants for exceptional contributions to preserving and propagating the buddhadharma.