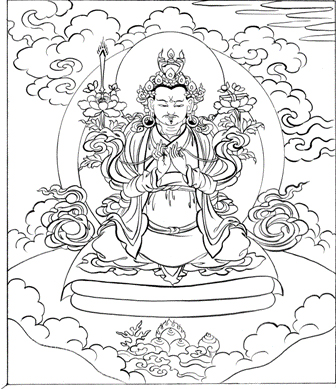 Part VI in a series of discussions with Rinpoche

King Trisong Deutsen was the 9th century Tibetan emperor who is credited with establishing Buddhism in Tibet. Tibetan Buddhists consider him a manifestation of Manjushri, the bodhisattva who embodies wisdom. In his life, King Trisong Deutsen made monumental contributions to the establishment and propagation of the Buddhadharma in Tibet. Dzongsar Khyentse Rinpoche tells of His Holiness Dilgo Khyentse Rinpoche, “With tears in his eyes, which was rare, he said that if one were to fill every canyon, every gorge, every hole on earth with gold as high as Mount Meru, not even a fraction of the kindness of King Trisong Deutsen could be repaid.”

Trisong Deutsen was the second of Tibet’s often-mentioned and much-beloved “Three Ancestral Kings.” The first was Songtsen Gampo, who lived in the 6th to 7th century CE, and is considered a manifestation of Avalokiteshvara; and the third was Tri Ralpachen, who is seen as an emanation of Vajrapani. “It is because of these three kings that Buddhism is so deeply rooted in Tibet,” says Rinpoche. “When Tibetans talk about these three kings, if they don’t have tears in their eyes, at least their necks move like an ostrich. Moreover, he is considered one of the founding fathers of the Nyingmapa tradition, together with Guru Padmasambhava and the Bodhisattva Abbott Shantarakshita.”

Trisong Deutsen’s mother was Lady Angchung of Mashang, a region in China, and his father was the Tibetan King Tridey Tsugten. He was only 13 when his father passed away and he was enthroned. He was given three wives and began his reign by following the course of his father – keeping the peace and minding the borders. But at the age of 20 his interest in the dharma began to blossom. Buddhism was already established in Tibet, thanks to King Songtsen Gampo, who two generations earlier had planted the seeds of the dharma by building 108 temples, including Lhasa Trulang and Ramochey, but Boen still remained very strong. Out of his own interest, and against the will of his ministers, King Trisong Deutsen dispatched Jnana Kumara to India to bring back a very highly renowned master from Nalanda University named Shantarakshita. By that time, the great Shantarakshita was old and toothless, but he was still willing to come teach the king and help consecrate the land that would be Samye Monastery. However, he confessed that he didn’t have the energy to tame the Tibetans. He suggested that the king try to seek Guru Padmasambhava of Uddiyana.

Again acting against the advice of his ministers, Trisong Deutsen sent five emissaries to find the yogi. After many tests and obstacles Padmasambhava arrived in Tibet, but the first meeting with the King was not harmonious. Although the King had the great merit to even think of inviting Guru Rinpoche to Tibet, he still had pride and expected to be paid homage. But Padmasambhava on the occasion of that very first meeting subdued the King’s pride, and it was the King who bowed to Padmasambhava in the end.

With the King’s wealth, might, and influence and Padmasambhava’s great wisdom and skill, the two, together with Shantarakshita, set about transforming Tibet into a Buddhist kingdom. Samye Monastery was completed, and the great Tibetan translator Vairochana and a host of Indian panditas and translators were invited from India to translate the dharma into Tibetan. “Nearly every sutra we have now is because of King Trisong Deutsen’s sponsorship,” Rinpoche says. “He is responsible for institutionalizing Buddhism, and he caused the dharma to spread and flourish.”

After Guru Rinpoche and Shantarakshita returned to India, the King went on to receive teachings from Vairochana and Namkai Nyingpo. He was given all the tantras and sadhanas, and through practice he achieved realization. As a sign of realizing his physical body to be a mandala of deities, it is said that he experienced journeying through all the buddhafields. Thanks to Padmasambhava’s long-life empowerments, the king lived to be 69 years old. He is now venerated as an incarnation of the noble Bodhisattva Manjushri.