Prof. Richard Salomon’s translation of The Buddhist literature of Ancient Gandhāra: An Introduction with Selected Translations (Somerville, MA: Wisdom Publications, 2018) has been chosen as the 2020 Khyentse Foundation Prize for Outstanding Buddhist Translation. 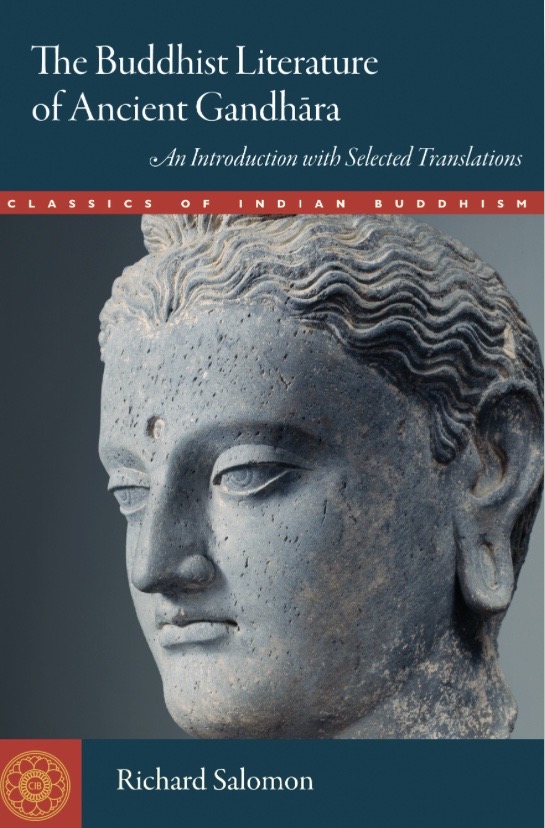 In the years following the conquest by Alexander the Great (356-323 BCE) of much of Asia, a series of empires rose up along the Silk Road. In what is now northern Pakistan, the civilizations in the region called Gandhara became increasingly important centers for the development of Buddhism, reaching their apex under King Kaniska of the Kusanas in the second century CE. Gandhara has long been known for its Greek-Indian synthesis in architecture and statuary, but until about 20 years ago, almost nothing was known about its literature. The insights provided by manuscripts unearthed over the last few decades show that Gandhara was indeed a vital link in the early development of Buddhism, instrumental in both the transmission of Buddhism to China and the rise of the Mahayana tradition. The Buddhist Literature of Ancient Gandhara surveys what we know about Gandhara and its Buddhism, and it also offers translations of a dozen short texts, from similes and stories to treatises on time and reality.

“I think that this is an incredibly important publication, which makes available to a wider readership a selection of early texts which, so far, have only been accessible to specialists. I think that this book – being, essentially, an anthology of translated texts, with a very rich, but readable, introduction.”

Hozan Alan Senauke of Berkeley Zen Center wrote,  “Every now and then, the adventure of scholarship leaps from the pages of a book. With a detective’s eye and a storyteller’s pen, Professor Salomon shares a scholar’s delight in these Silk Road texts and contexts.”

An award of US$8,000, the annual Khyentse Foundation Prize for Outstanding Buddhist Translation was set up in 2011 to encourage and honor excellence in translation works that make the Buddhist heritage accessible to a broader public. Nominated works must have been published in the preceding 2 years, and can include works of translation into English from any of the main classical languages of Buddhism, Pali, Sanskrit, Tibetan, or Chinese. The translation can of be a sutra, commentary, treatise, biography, history, liturgy, or practice manual from any tradition of Buddhism.

“I deeply appreciate your consideration of my book, and wish to express my gratitude to Khyentse Foundation for this and all the other important work it is doing to increase knowledge and understanding of Buddhism both in and beyond the academic world.”

The current selection committee is made of four Buddhist scholars, Professors Stefano Zacchetti, Naomi Appleton, Paul Harrison, and Jan Nattier. Prof. Zacchetti, Yehan Numata Professor of Buddhist Studies at the Faculty of Oriental Studies at the University of Oxford, was the nominating member for this year’s prize. His passing in April 2020 adds an especially poignant note to the award. He will be missed by all who knew him.

Prof. Richard Salomon’s translation work is the eighth to win this annual prize. Last year’s prize was awarded to Karl Brunholzl for his translation of A Compendium of the Mahāyāna: Asaṅga’s Mahāyānasaṃgraha and Its Indian and Tibetan Commentaries, 3 volumes, published by Snow Lion in 2018. Read more about the prize and previous winners on the KF Awards page.

He is the former president of the International Association of Buddhist Studies and of the American Oriental Society. Since 1996 he has been the director of the University of Washington’s Early Buddhist Manuscripts Project, leading the ongoing international project of editing, translating, and publishing the earliest surviving Buddhist manuscripts.

Read more about Prof. Salomon in his own writing: Buddhist Studies through the Side Door.