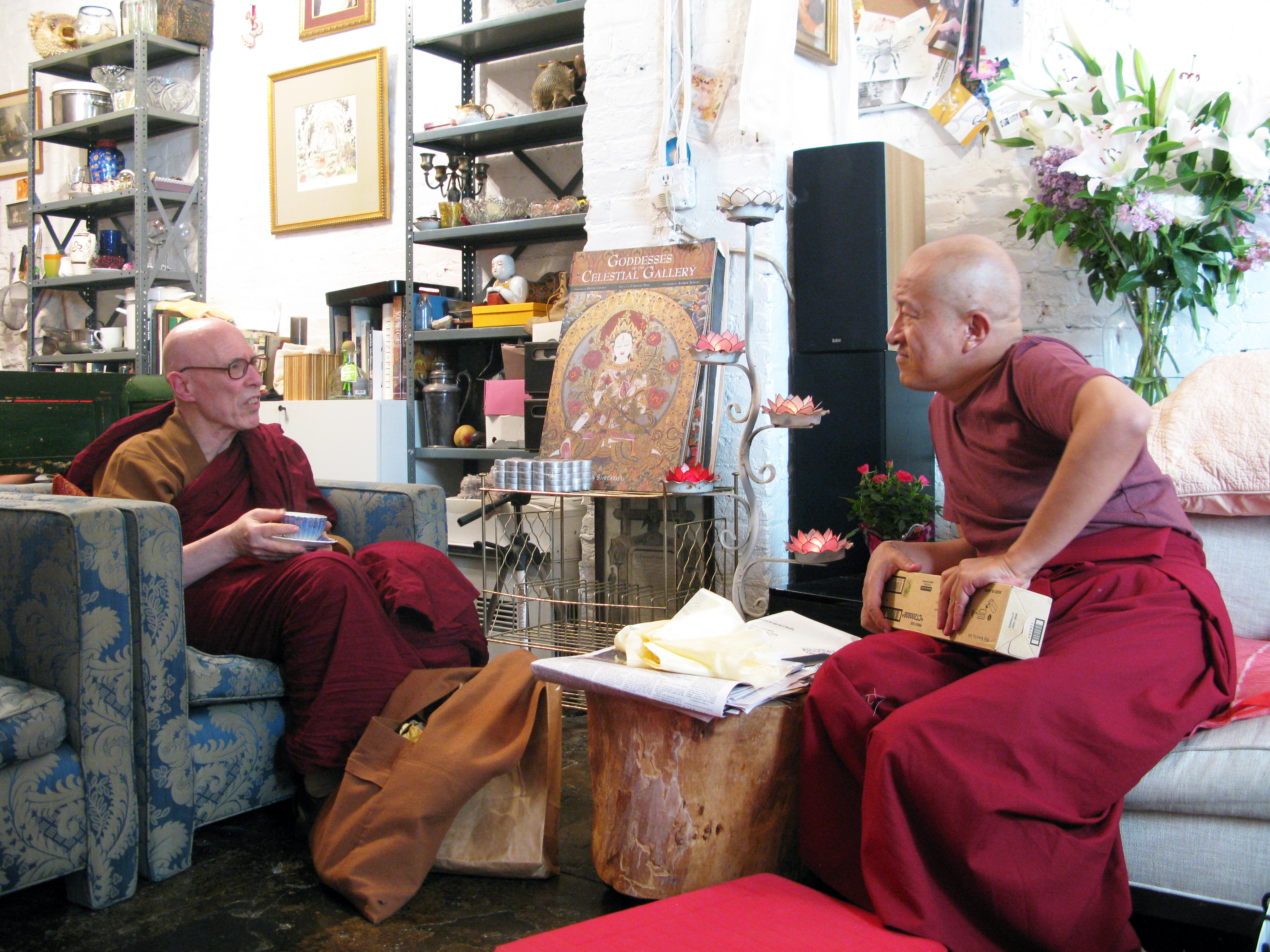 (New York, June 10, 2013) — Venerable Bhikkhu Bodhi was awarded the 2013 Khyentse Foundation Prize for Outstanding Translation for publication of The Numerical Discourses of the Buddha: A Translation of the Aṅguttara Nikāya (Boston: Wisdom Publications, 2012). Dzongsar Khyentse Rinpoche met with Bhikkhu Bodhi in New York on May 27 to present the $8,000 award.

The Aṅguttara Nikāya (roughly, “Collection of Discourses Arranged by Numbers, in Ascending Order”) is the second longest of the four basic suttas or discourse collections of the Pāli canon, and the repository of many important and influential teachings not found elsewhere. The text was previously translated into English by F. L. Woodward and E. M. Hare as “The Book of the Gradual Sayings,” in five volumes, 1932–1936. Despite the long-felt need for a new translation, the sheer size of the collection has posed an almost insurmountable challenge to translators.

“Now at last the Venerable Bhikkhu Bodhi has risen to that challenge,” said Paul Harrison, professor of Religious Studies at Stanford University and a member of the Khyentse Foundation Prize Selection Committee. “He has produced an authoritative and lucid rendition that will quickly become the standard English version and is likely to remain so for many generations. Into one massive volume (1,944 pages long) he has packed not simply a splendidly readable translation of the suttas of the Aṅguttara Nikāya, but a fine introduction, over 270 pages of erudite notes, and a number of useful appendices, making his work an indispensable resource for the study of the Buddha’s word for scholars and practitioners alike. This is a major contribution to Buddhist scholarship.”

With this award, Khyentse Foundation wishes to recognize not just the prodigious achievement that the publication of The Numerical Discourses represents in itself, but also Bhikkhu Bodhi’s lifetime of dedication to the task of rendering the Buddha’s words accessible to a wider English-speaking audience. Among other things, this dedication has resulted in his translation of the even more voluminous Saṃyutta Nikāya (2000) and his joint rendition (with Bhikkhu Ñāṇamoli) of the Majjhima Nikāya (1995). No other living scholar has made a contribution of such magnitude to the translation of Buddhist scriptures into a modern language. Bhikkhu Bodhi is truly a worthy recipient of the Khyentse Foundation Prize for Outstanding Translation.

Venerable Bhikkhu Bodhi is chief abbot of Chuang Yen Monastery in Carmel, New York. He said that he will donate the award money to two nonprofit organizations.

The Numerical Discourses of the Buddha (Venerable Bhikkhu Bodh’s translation of the Anguttara Nikaya) is available from Wisdom Publications. Hardbound. 1,944 pages. ISBN 1-61429-040-7.

Praise for The Teachings of the Buddha Series

“A triumph.”—The Middle Way: Journal of the Buddhist Society

“As close as we’ll get to the original teachings and account of the life of the Buddha.”—   Tricycle Magazine

“A book to be kept close at hand for a lifetime—it will long endure as a classic of scholarship and render the teachings of the historical Buddha accessible to any who have eyes to see and the interest to look.” — Inquiring Mind

“An amazing work that speaks to us across 2500 years [to] open up new and precious insights into the depths of Buddhist history and thought.” — Mountain Record

“A priceless gift.”- —J oseph Goldstein, author of One Dharma

“Bhikkhu Bodhi is a brilliant translator.” — Jack Kornfield, author of After the Ecstasy, the Laundry