—More Than 335 Summaries of the Tibetan Kangyur Sutras Completed 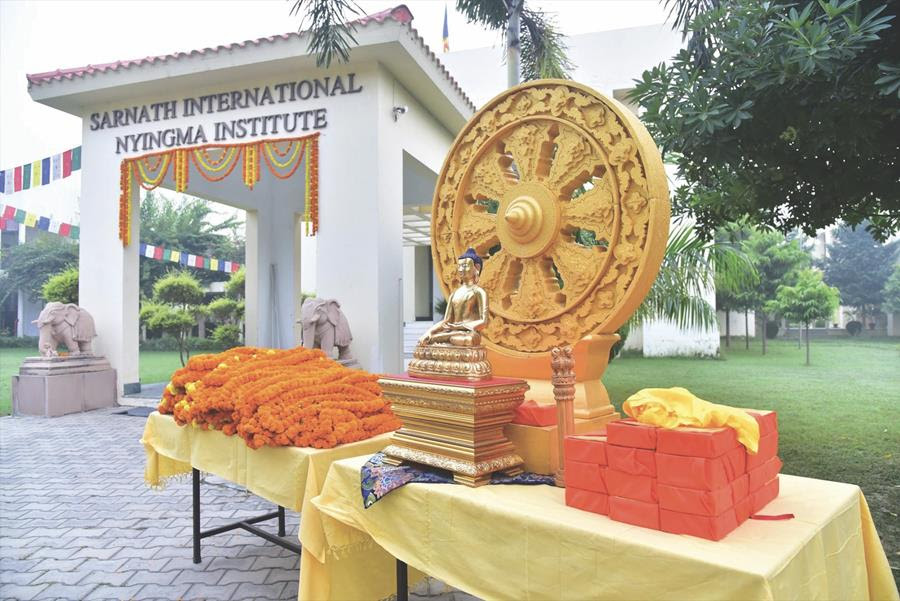 Established in 2013 with the aspiration to share the buddhadharma with as many people as possible, Sarnath International Nyingma Institute’s (SINI) vision is very much in line with Khyentse Foundation’s own vision. The institute is located near the Dhamek Stupa in Sarnath, in the Indian state of Uttar Pradesh—a site of great importance in Buddhism, where the Buddha gave his first teaching.

SINI is one of more than 20 organizations founded by the renowned Tibetan lama Tarthang Tulku Rinpoche (b. 1935). Instrumental in introducing the Nyingma tradition of Tibetan Buddhism to the United States, Rinpoche set up the Nyingma Institute in Berkeley, California, in 1972. Indeed, SINI’s roots go back more than 50 years. Soon after Tarthang Tulku left Tibet for India as a refugee in 1958, he established Dharma Mudranalaya Press in nearby Varanasi. With the mission of preserving and distributing Tibetan Buddhist teachings, the press was reestablished in California as Dharma Publishing in 1975. 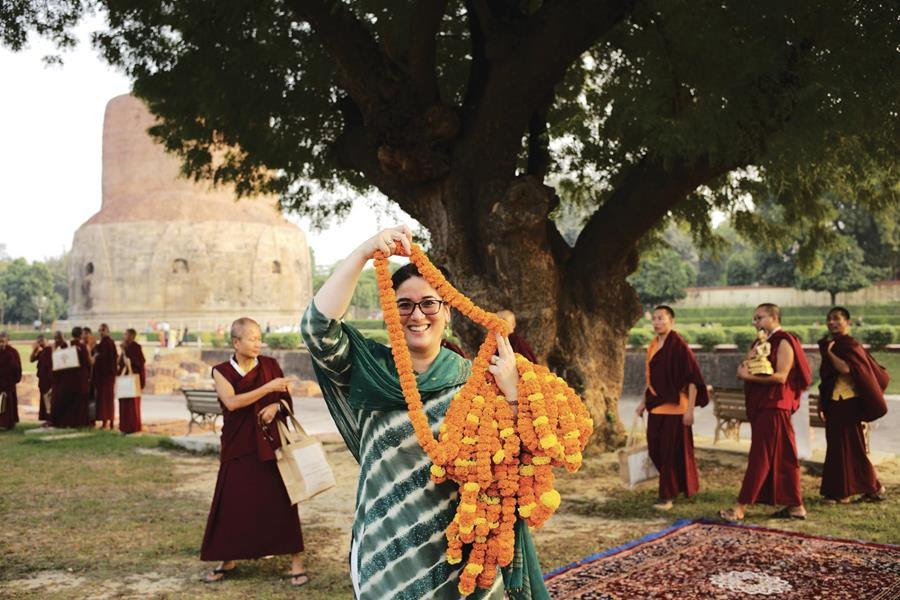 SINI is directed by Tsering Palmo Gellek, the youngest of Tarthang Tulku’s three daughters. Since 2001, Tsering has undertaken Buddhist cultural preservation in Asia. Her previous projects include the installation of large peace bells at sacred sites in India and Nepal. In 2008, she was appointed director of the 15th renovation of the Swayambhu Stupa in Kathmandu.

SINI’s stated mission is “building bridges of goodness.” Following Tarthang Tulku Rinpoche’s directive, the primary bridge is between East and West, although the bridges also span modern and traditional thought, self and other, contemplation and action. Residents at the institute include international volunteer staff and students, as well as Tibetan monastics.

The bridges of goodness are founded on four pillars: to sustain the roots of the dharma, in which SINI monastics conduct traditional Buddhist practices, prayers, ceremonies, pilgrimages, and retreats; to advance the study of classical Buddhist languages and English; to empower the transmission of the dharma; and to promote interdisciplinary collaborations.

“SINI has opened up into a real diversity of fields,” said Tsering. “Each of the pillars offers different programs, and we keep adjusting these programs to meet contemporary issues.”

One of SINI’s current projects is the first-ever comprehensive Tibetan Buddhist “encyclopedia” of the words of the Buddha. Launched by Tarthang Tulku in 2019, the Kangyur Karchag project has been guided and blessed by many eminent lamas. It aims to summarize the 368 sutras contained in the Kangyur—the collection of texts regarded as buddhavachana, or “Buddha-word,” that have been translated into Tibetan. The sutras are initially synopsized in Tibetan with the intention to benefit monasteries, shedras, and Buddhist scholars. A condensed version of the karchag (roughly translated as “index” or “catalogue”) will make the material accessible to laypeople and form a springboard for the development of curriculum materials for Tibetan schools. There are also plans to render the summaries in English and Chinese and to make them available online.

Sample summary of a sutra from the Kangyur Karchag. Photo courtesy SINI.

The Kangyur Karchag project has already exceeded its initial goals. With 51 writers and researchers from all the Tibetan Buddhist traditions, based in India, Nepal, Bhutan, and Tibet, as of December 1, 2022 more than 335 of the 368 sutras in the Kangyur have been summarized. The work is directed by Khenpo Ju Tenkyong from Larung Gar Institute in China, who recently finished editing a 223-volume Tibetan terminological dictionary. The researchers compare Tibetan editions of the Kangyur with those in Chinese, Pali, and Sanskrit, while the writers consult available commentaries, often reading 20 to 30 commentaries for sutras that are well known. The first full draft of the karchag will be ready by the end of January 2023 and the final version by early 2024.

Although catalogues of the Kangyur have been compiled before, this karchag can be considered unique. “[The others] were [mostly] missing introductions, which can immediately inform the reader of all the essential information within the sutra,” said Khenpo Ju Tenkyong. “Some previous karchags did have short introductions, but none were as thorough or as comprehensive as the ones we are writing. It’s like we’re creating an ‘ID card’ for each sutra.” 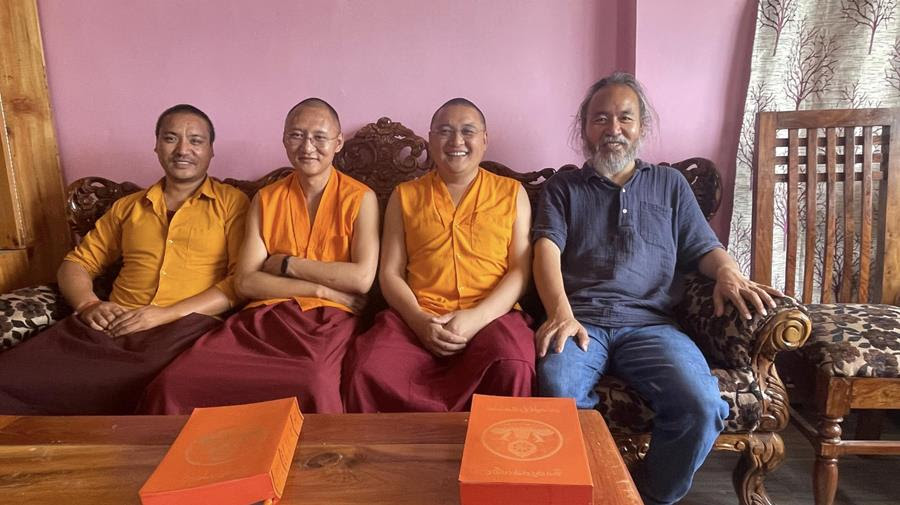 “We try to draw out the main instruction from each sutra, the heart-essence that readers should take away after reading. In particular, we consider how these sutras can most benefit people in the modern world,” said Khenpo. “We strive to show all people, no matter their background, how relevant these sutras are to their own lives. These are not just ancient books—these are pith instructions to show us how to make the best use of our precious human life.” 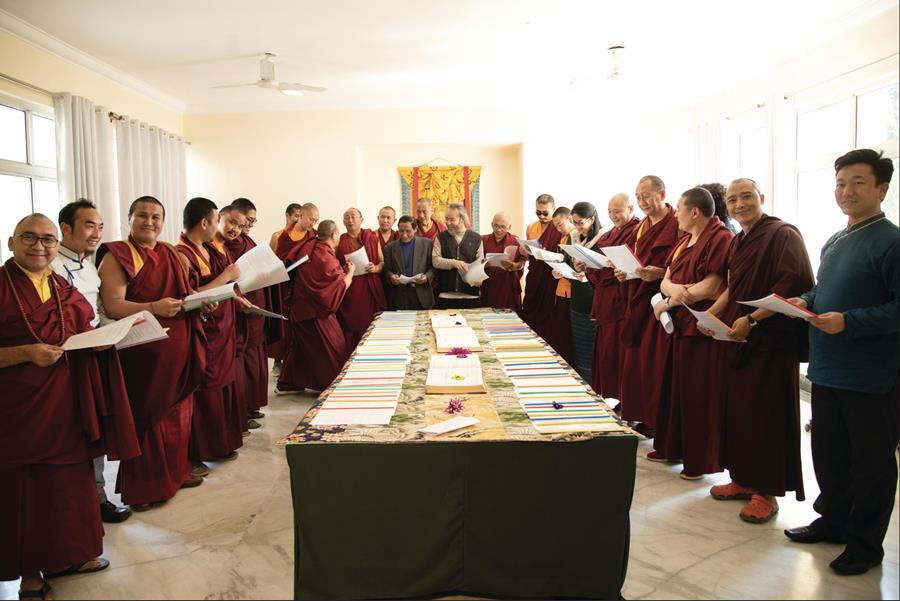 Forming a link between the different branches of Buddhism, the Kangyur is regarded as the foundation of dharma studies. “The encyclopedia project has been a catalyst for the study of the Kangyur,” said Tsering. “I was surprised to learn that students don’t usually get an overview of the Kangyur in the shedras, which I think is so important for the longevity of the teachings. In addition to the result of the karchag, the young khenpos and lopons involved have gained precious knowledge. They didn’t know the Kangyur at this level before, and by engaging in this work, we have helped train another generation. And that knowledge will continue to be transmitted.” 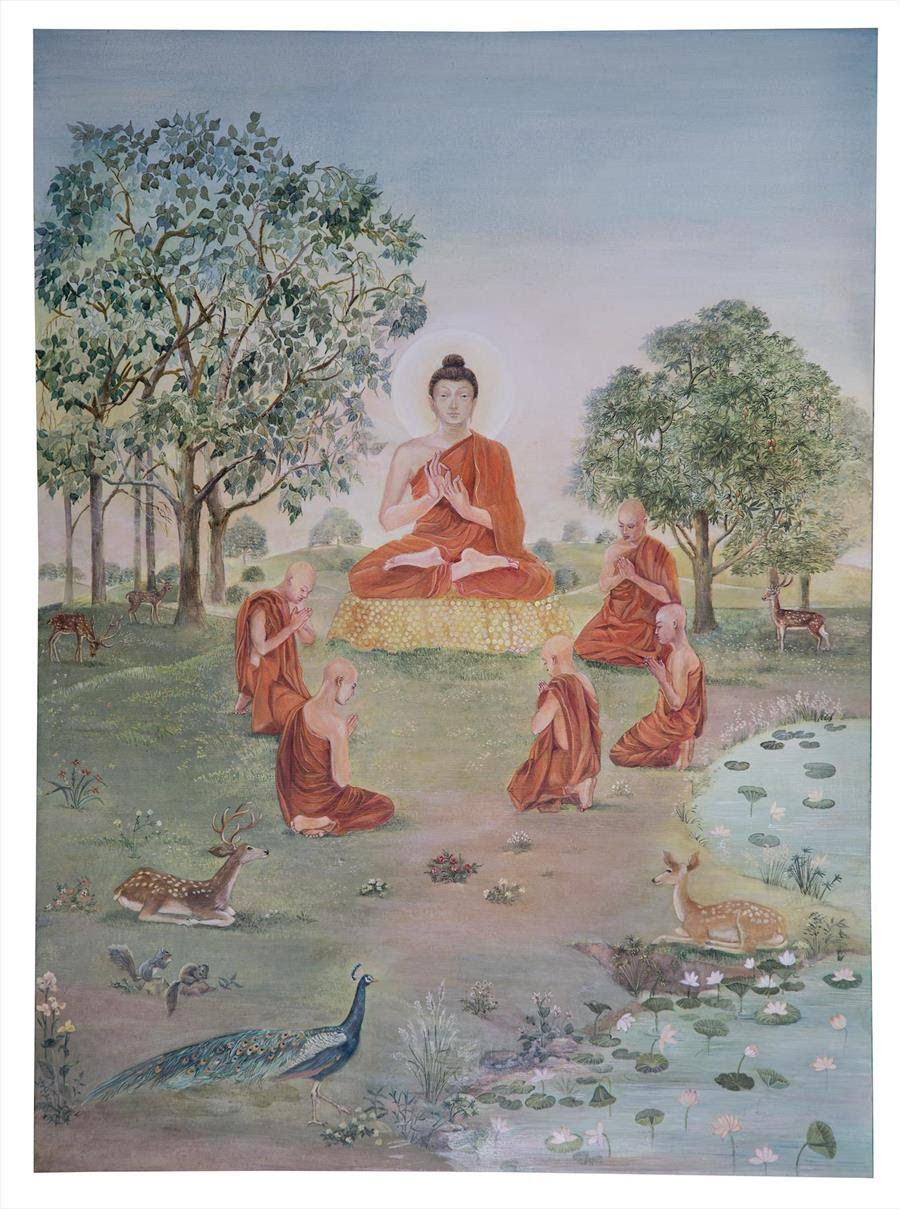 An illustration of the Buddha’s first turning of the wheel at Sarnath, by Kaveri Singh.

Working with a leading Indian artist and a graphic designer, SINI is preparing illustrations for the encyclopedia based on descriptive details in the sutras. An online resource of audio and visual files to aid in the study and contemplation of the texts will be available as well.

Some Other SINI Projects Supported by KF

In 2019 and 2020, Khyentse Foundation awarded SINI annual grants to partially support the Kangyur Karchag project. In 2021, a further 3-year award was made in support of the catalogue and other SINI programs. 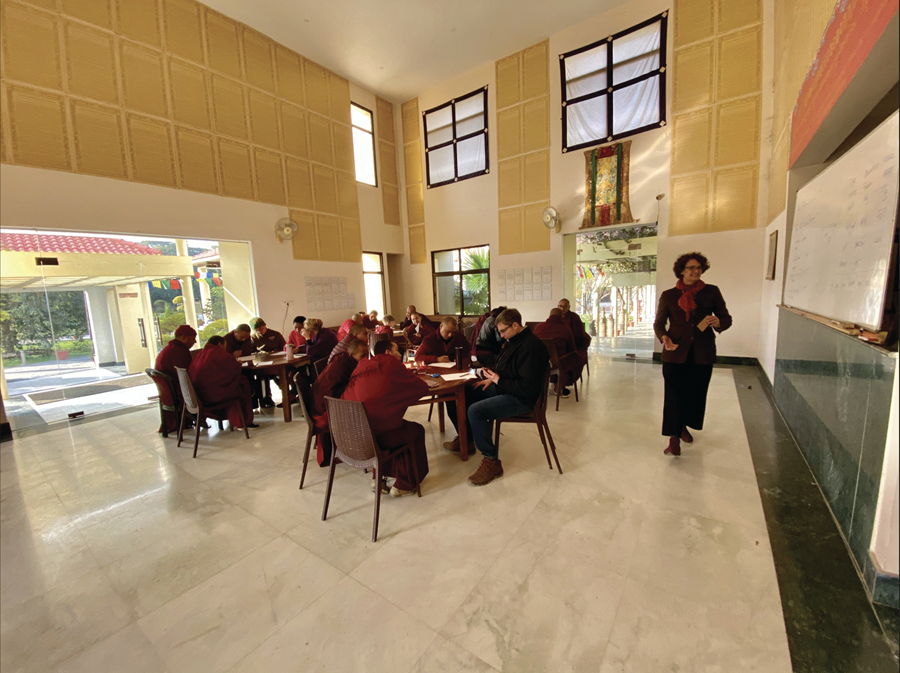 SINI EDP students in a workshop on the power of metaphor. Photo courtesy SINI.

Other SINI projects currently supported by KF include the English for Dharma Purposes (EDP) Program and Textbook Series and Upaya for Monastics: Transmitting the Dharma for the Modern World, both geared toward helping the formal sangha not only to survive in today’s world but also to serve in its positive transformation.

Currently 40 to 50 monastics are enrolled in the 3-year EDP program, but by February 2023 more students are expected, including a number of nuns. SINI is developing an innovative 3-volume textbook for the program, aimed specifically at Buddhist monastics to prepare them for dharma preservation and transmission in the English-speaking world.